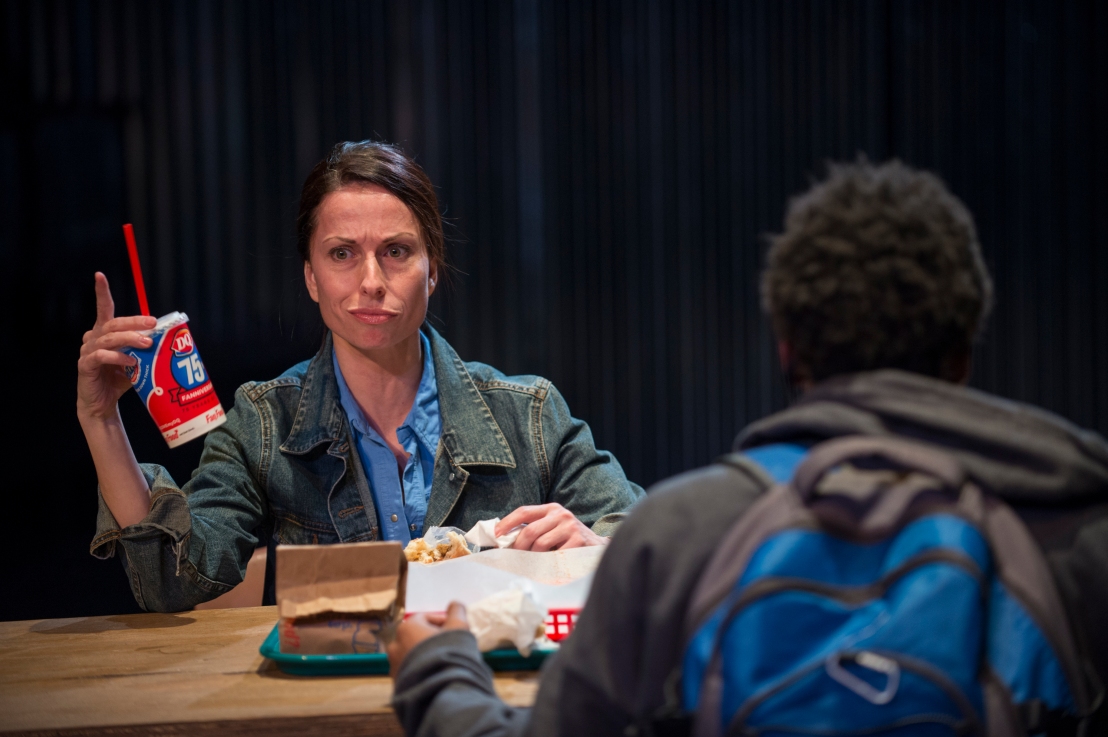 KILL FLOOR follows Andy (Audrey Francis), who has recently been released from prison, as she takes a job at the local slaughterhouse in her hometown with the help of a tenuous high school connection, Rick (Eric Slater), who works on the administrative side of the company. As Andy tries to put the pieces of her life back together, she also aims to reconnect with her 15-year-old son B (Sol Patches). And a further complication? In the five years since Andy has last seen her son, he has since become a vegetarian—and he strongly disapproves of his mother’s new job. But B is also struggling with connection issues of his own. He longs for the attention of his high school classmate, Simon (Louie Rinaldi), who only seems interested in bumming favors. Above all, KILL FLOOR focuses on Andy’s desire to forge a new relationship with B and the challenges of that family dynamic.

Though the play focuses on Andy’s work at the slaughterhouse, Koogler never shows us the factory itself. Rather set designer Dan Stratton’s stark, steely set and Matt Chapman’s ominous sound design (with plenty of haunting crunching noises) evoke the slaughterhouse environment. This gives audiences a taste of the gore that Andy experiences in her daily work life, while allowing KILL FLOOR to maintain laser focus on the relationships in the play.

Koogler also effectively hints at larger issues in KILL FLOOR. In conversation with Andy, Rick has an uncomfortable habit of referring to the other employees on the slaughterhouse floor as “the Mexicans.” And Simon is a white wannabe rapper whose use of language offends both B (whose father is black) and this audience member. And yet because these moments are embedded within the dynamics of these specific characters, Koogler’s dialogue never feels heavy-handed. Rather, these moments in KILL FLOOR serve as reminders of the unfair dynamics in many of the play’s relationships—mirrored by Andy’s dissatisfaction with her lot in life and her determination to make it better.

Koogler’s characters are well-drawn and specific, and the cast fully brings them to life. As B, Patches is vulnerable and touching—and excellent at evoking the wild mood swings typical of a high school sophomore. Rinaldi gives a convincingly slimy performance as Simon. And Eric Slater’s Rick manages to be ignorant and just a little charming at the same time. As Andy’s new friend Sarah, Darci Nalepa gives a finely honed performance. Francis gives her all as Andy. Andy runs through a constantly shifting gamut of emotions throughout the play, and Francis convincingly and movingly portrays all of them. Andy has clearly seen a lot in prison—and is experiencing a lot in the slaughterhouse as well. Francis allows us to see all the turmoil and pain that Andy suffers. She makes us truly feel for this complicated and flawed character—and root for her to renew her relationship with B.

KILL FLOOR makes for an emotional and intense theatrical ride. And though I won’t reveal what happens, the final scene is pitch-perfect, both expertly written and performed. KILL FLOOR certainly goes to some fittingly dark places but also has moments that are both laugh-out-loud funny and touching. Though KILL FLOOR calls into question whether it’s humane to eat meat, there’s no doubt that the stellar performances in this play are filled with heart and humanity.