Robert Askins’s fiercely hilarious, dark, and moving HAND TO GOD makes its Chicago debut in a sublime and visceral production at Victory Gardens Theater under the deft (but not sock puppeted) hand of Gary Griffin.

END_OF_DOCUMENT_TOKEN_TO_BE_REPLACED

Helmed by Steppenwolf Artistic Director Anna D. Shapiro as she launches her first curated season, David Rabe’s world premiere play VISITING EDNA gives audiences a nearly three hour exploration of the relationship between the elderly Edna (Debra Monk), who has terminal cancer, and her middle-aged son Andrew (Ian Barford). And while Rabe clearly wants audiences to grapple with mortality and the joys and challenges of family relationships, the characters—and therefore the play—so often shy away from these issues that are meant to form the heart of VISITING EDNA. Certainly, it is understandable that Edna and Andrew are reluctant to acknowledge Edna’s illness and are also hesitant to dive into some of the thornier parts of their past as mother and son. But despite lovely, honed performances from both Monk and Barford (who does consistently excellent work in everything in which I’ve seen him previously), VISITING EDNA spends so much time in these moments of distraction as to become tiresome.

END_OF_DOCUMENT_TOKEN_TO_BE_REPLACED

Porchlight Music Theatre’s timely production of the 2008 Tony Award-winning musical IN THE HEIGHTS offers audiences the chance to experience this earlier work by HAMILTON creator Lin-Manuel Miranda (with book by Quiara Alegría Hudes) in a fittingly intimate setting as designed with meticulous detail by Greg Pinsoneault. The Latino/a community of New York City’s Washington Heights comes to life under the direction of Brenda Didier (with choreography by Didier and Chris Carter). The ensemble of this HEIGHTS teems with energy and abundant vocal talent (particularly from many of the expert female actors), making this an inviting and enjoyable evening of theater.

END_OF_DOCUMENT_TOKEN_TO_BE_REPLACED 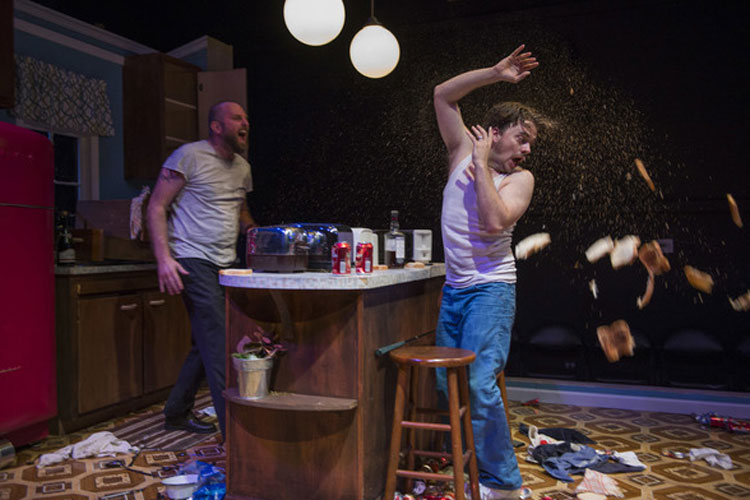 With deft direction by James Yost, Shattered Globe’s production of TRUE WEST made for a solid first Sam Shepard experience for this critic.Kevin Viol and Joseph Wiens have cultivated a convincing and powerful dynamic as estranged brothers Austin and Lee, who are holed up at their mother’s house in the suburbs of Los Angeles. Both actors’ performances ground Shepard’s drama and the uncomfortable rapport between the two siblings they portray provides some intense onstage moments.

END_OF_DOCUMENT_TOKEN_TO_BE_REPLACED

Chicago, fasten your seat belts—the world premiere musical HELLDRIVERS OF DAYTONA has parked at the Royal George Theatre…and it’s a bumpy, messy ride. Billed as a spoof of 1960s racing films, composer Berton Averre (known for “My Sharona”), lyricist Rob Meurer, and book writer Mark Saltzman have developed a show that’s entirely too on the nose. HELLDRIVERS lacks the satirical tone it seeks; instead, the first act replaces the sexual repression common in those 1960s movies with blatant, unoriginal sexual innuendoes and jokes in poor taste. Though conceived as an ironic take on the movies of that era, HELLDRIVERS feels overall cringe-worthy in the first act. The show shifts gears in the second act to focus more on sending up a number of great American musicals (and one Billy Joel song). The overall experience is erratic.

END_OF_DOCUMENT_TOKEN_TO_BE_REPLACED

Kick up your heels—the 2013 Tony Award-winning musical KINKY BOOTS is back in Chicago for the first time since its pre-Broadway world premiere! This first national tour engagement at Broadway in Chicago’s Oriental Theatre captures much of the vivacity and positive “be yourself” spirit embedded in the show’s script (with music and lyrics by Cyndi Lauper and book by Harvey Fierstein). The current ensemble though has, ahem, rather large shoes to fill, especially in the wake of Billy Porter’s phenomenal Tony-winning turn as drag queen Lola. On the whole, the ensemble infuses this production of KINKY BOOTS with the joy and passion needed to make the musical work (and they execute director/choreographer Jerry Mitchell’s dance moves nicely). Gregg Barnes’s costumes shine brightly as ever for this production, and those titular boots remain literally dazzling. Acclaimed designer David Rockwell’s set is rendered nicely here–the set does not feel lacking in any way.