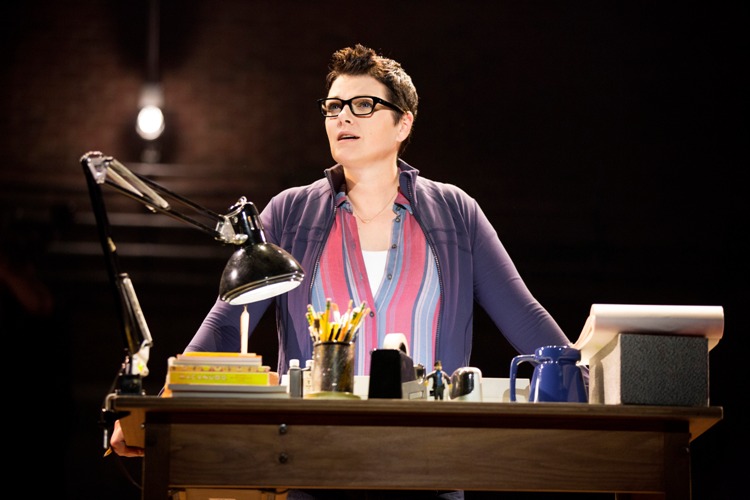 Now making its national touring and Chicago debut, FUN HOME is a lovely and genuinely original new musical based on the eponymous graphic memoir by Alison Bechdel. It’s worth noting that the show’s name comes from the fact that the Bechdel family business, was indeed, a funeral home in the small town of Beech Creek, Pennsylvania. But it also underscores that this is a show in which Alison must confront the memories of her father and “straighten” out the fun house mirrors of her past to try to make sense of it. Many readers will also know that FUN HOME won the 2015 Tony Award for Best Musical and was notably the first show with an all-female writing team (composer Jeanine Tesori and librettist/lyricist Lisa Kron) to win that award.

FUN HOME’s storytelling construction is striking. The show opens with Alison (Kate Shindle), introducing the first of many “captions” that make up the musical’s narrative threads. But the scene soon unfolds around her to reveal the family life of Small Alison (Alessandra Baldacchino) and the other members of the Bechdel family—including, most notably Bruce Bechdel (Robert Petkoff), Alison’s troubled, sometimes controlling, and closeted father. And though FUN HOME focuses on the complexities of that relationship, this opening moment is a happier one. Small Alison beckons her father to play “airplane” with her, a moment cemented in present-day Alison’s mind as one of the best memories. As FUN HOME unfolds, we also meet Medium Alison (Abby Corrigan), who is just beginning her freshman year at Oberlin College—and also discovering her own identity and sexuality more clearly. But just as Medium Alison’s world begins to open up, we also see that her father’s world seems to be closing ever further in, leading to his suicide.

What FUN HOME so brilliantly captures in its storytelling  is that Alison’s self-discovery and her attempts to make sense of her relationship with her father are anything but linear. All three Alison’s exist throughout the show, which proceeds a-chronologically. The motifs in Tesori’s score and the clarity of Kron’s writing make it so that audiences can easily follow these jumps in time, even as the overall effect mirrors Alison’s chaotic, emotional process in sorting out her past. We also see a number of past sequences in which the Bechdel family actively tries to avoid that which makes them uncomfortable, as they sing a series of resonant “La la la’s” over the vocals of other actors. It’s a clever and powerful device, and at one point unfolds into a fantasy sequence in the number “Raincoat of Love,” in which Small Alison imagines her family as a perfectly happy unit.

This is also a reminder that Alison is now forced to confront those glossed over moments as she writes her memoir. In the late number “Telephone Wire,” beautifully delivered by Shindle and Petkoff, Alison imagines what she might have said to her father on a drive during her first visit home from college. It’s a moment that underscores the difficulty of confronting her past but also a reminder that she may be on her way to healing.

Under the direction of Sam Gold, the performances in FUN HOME are across the board terrific. Shindle is overall lovely as Alison, finding moments of command and emotional vulnerability while also giving Small and Medium Alison room to shine. Baladacchino charms as Small Alison and occupies the stage with a poise and grace of a much more experienced actor. Her rendition of the pivotal number “Ring of Keys” is finely honed. As Medium Alison, Corrigan delightfully embodies the moment of uncertainty and excitement that comes with first love, which she finds with fellow student Joan (Karen Eilbacher). Petkoff beautifully captures the erratic complexity of Bruce Bechdel, allowing audiences to feel both empathy and anger towards him—his performance reflects the three-dimensionality of the character. Susan Moniz garners immense pathos as Helen Bechdel and her act two solo “Days and Days” is heartbreaking and memorable. Pierson Salvador and Lennon Nate Hammond are adorable as Alison’s brothers Christian and John—and all three Bechdel children supply what is indeed the most “fun” moment in the show, “Come to the Fun Home” (with vibrant choreography by Danny Medford).

FUN HOME elegantly captures both the pain and joy of memory, and this touring engagement highlights the uniqueness of this show’s score and writing.