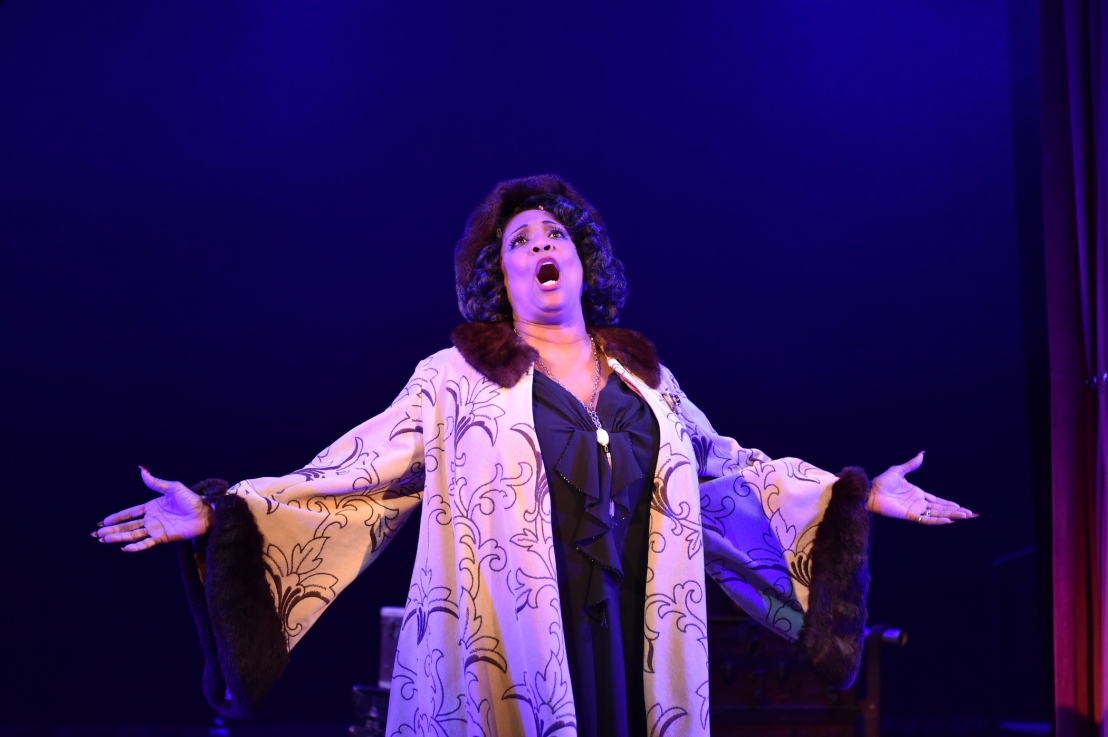 Here she is, boys. Here she is, world. Here’s E. Faye Butler as Mama Rose in GYPSY. Butler commands the Porchlight stage with a presence that’s both larger-than-life and also at the same time a deeply revealing character study. To say that Butler’s portrayal of Mama Rose is a star turn is almost not enough. Butler seems to live and breathe this role; she does not appear to be acting but rather fully inhabiting this iconic character.

Vocally, Butler’s performance is equally jaw dropping. Rose’s challenging songs seem to fit her voice like a glove. Butler has the belt of an Ethel Merman and the power and poignancy of an Ethel Waters. Her voice truly sounds as if it comes from another era, and precisely the era in which GYPSY takes place. To hear Butler sing Jule Styne and Stephen Sondheim’s classic numbers for this 1959 musical is to be utterly mesmerized. Butler has an entirely magnetic presence. And though she’s commanding and vocally powerful, Butler also shows us the immense insecurities that lie beneath Mama Rose’s surface. She has clearly investigated the infinite layers within this role.

Butler’s masterful performance is reason enough to see Porchlight’s GYPSY, but she’s also in great company. This entire production will entertain you, indeed. Artistic Director Michael Weber’s taut direction makes the musical move at captivating pace; though GYPSY is close to three hours long, the action never drags. Every time I watch GYPSY, I’m soon reminded that this Golden Age musical includes several moments of intentionally bad vaudeville acts. Though Rose has big dreams for her daughters June and Louise, the acts she writes for them are decidedly less dreamy. Weber and choreographer Christopher Carter handle this challenge superbly. All of the diegetic numbers in GYPSY are humorous and manage to display the formidable talents of the cast members involved even as the material itself remains occasionally and purposefully cringe-worthy. GYPSY’s set design also nods to the show’s theme of forever awaiting a big break. Jeffrey D. Kmiec’s set has intentionally visible wings, which house a variety of props and costumes throughout the run-time. This backstage setting becomes an apt metaphor for Mama Rose’s own life: she is always waiting in the wings, for she “was born too soon and started too late.” Bill Morey’s costumes, however, have a bold, period-authentic center stage approach.

While Butler’s star turn as Mama Rose forms the heart of GYPSY, equally talented players surround her. Butler is one of the first black women to essay the role of Mama Rose, and the entire cast is equally diverse. While the production wisely does not become an overt comment on race relations in America, it is interesting to note that Uncle Jocko, Mr. Goldstone, and T.T. Grantzinger are all played by white actors. When it comes to deciding if Mama Rose’s act for her daughters June and Louise will be booked on the vaudeville circuits, the decision is quite literally in the hands of white men. This is a poignant dynamic that further informs Mama Rose’s hope to strike it big in vaudeville, even as the art form is dying out.

As Louise, Daryn Whitney Harrell showcases her beautiful vocals without giving away the ending. Harrell’s Louise is necessarily timid and withdrawn in her earlier scenes, which makes her transition to the famous Gypsy Rose Lee all the more captivating. Harrell allows us to see the character truly come into her own. Along with Aalon Smith as June, both actors enable us to see the immense pressure that Mama Rose’s demands put on the sisters. Harrell and Smith also have a winning moment in their duet “If Momma Was Married.” They harmonize beautifully and also maximize the comedic beats in the number.

As talent agent and Rose’s love interest Herbie, José Antonio García is perfectly affable and just a little gruff. These acting choices precisely suit the role. Kudos must also be given to Marco Tzunux as Tulsa, who dances up a storm, and Elya Faye Bottiger as Agnes, who has daffy and delectable comedic timing. In the second act character number “You Gotta Get A Gimmick,” Dawn Bless, Honey West, and Melissa Young have wonderful turns—though I won’t spoil exactly how they take on this song.

Above all, Butler’s magnificent portrayal of Mama Rose makes this GYPSY a must-see. Look out, Chicago. It’s Butler’s turn. And she is making the most of it.