The first national tour of the MEAN GIRLS musical has arrived in Chicago, and it’s totally fetch. Original screenwriter Tina Fey has partnered with composer Jeff Richmond (her husband), lyricist Nell Benjamin, and director/choreographer Casey Nicholaw to create a show in line with its pop musical contemporaries. MEAN GIRLS has an unabashedly pop score, filled with a combination of big belty numbers and upbeat tunes. Benjamin’s lyrics cleverly recreate many iconic moments from the original 2003 film through music, while Fey’s book also introduces many new jokes—particularly when it comes to the use of social media. Cady Heron’s initiation into the vicious halls of North Shore High, and her encounter with reigning clique The Plastics, will surely delight fans of the movie.

Nicholaw’s production concept lends itself nicely to a tour. Scott Pask’s set relies heavily on projections (with video designs by Finn Ross and Adam Young and which were flawlessly executed on opening night) to convey a range of different spaces, and the set pieces that make up North Shore High can easily glide on and offstage. Thus, this tour does not compromise at all when it comes to production value. Nicholaw’s direction and choreography are similarly inventive; I particularly enjoy the use of cafeteria lunch trays in lieu of tap shoes during “Where Do You Belong?,” a number in which North Shore High misfits Damian and Janis introduce newcomer Cady to the school’s various cliques.

The touring cast is certainly on par with Broadway; they excel at finding opportunities for audiences to enjoy much awaited moments from the film onstage, while also making the roles uniquely their own. As Cady, Danielle Wade seamlessly transitions from naive newcomer to manipulative popular girl. Wade’s malleability as a performer allows us to 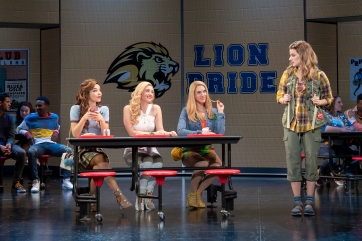 buy into Cady’s transformation, while never finding her out-and-out mean. It should come as no surprise that Queen Bee Regina George’s cruel high school reign translates to some powerful belting songs in Richmond’s score; Mariah Rose Faith delivers on these mighty solos beautifully, and she also adds her own humorous flare to the role. As Regina’s right-hand woman Gretchen Weiners, Megan Masako Haley delivers on the character’s simultaneously frantic and vulnerable qualities. Haley is also one of the finest dancers in the company, executing Nicholaw’s energetic choreography with ease. Rounding out the trio of Plastics, Jonalyn Saxer is a veritable scene stealer as Karen Smith. Saxer easily earns some of the biggest laughs of the night, particularly during Karen’s big solo number “Sexy,” in which she extols the virtues of Halloween. Saxer understudied this role on Broadway, and her understanding of the character clearly shows.

Cady and the Plastics are in good company. Eric Huffman is splendid as Damian, leaning into the musical theater tropes that make up the character without a false note. Mary Kate Morrissey makes an excellent Janis, as she finds the balance between the character’s IDGAF exteriority and her underlying vulnerability. Morrissey’s rendition of Janis’s big solo “I’d Rather Be Me” is stunning; she nails every note and brings a great deal of energy in the second act.

If you’re a fan of the original film or if you love contemporary pop musicals (think HEATHERS or LEGALLY BLONDE), the MEAN GIRLS national tour is a must-see. And beyond the material itself, this touring cast seals the deal with their performances of Fey’s iconic MEAN GIRLS characters. So fetch!