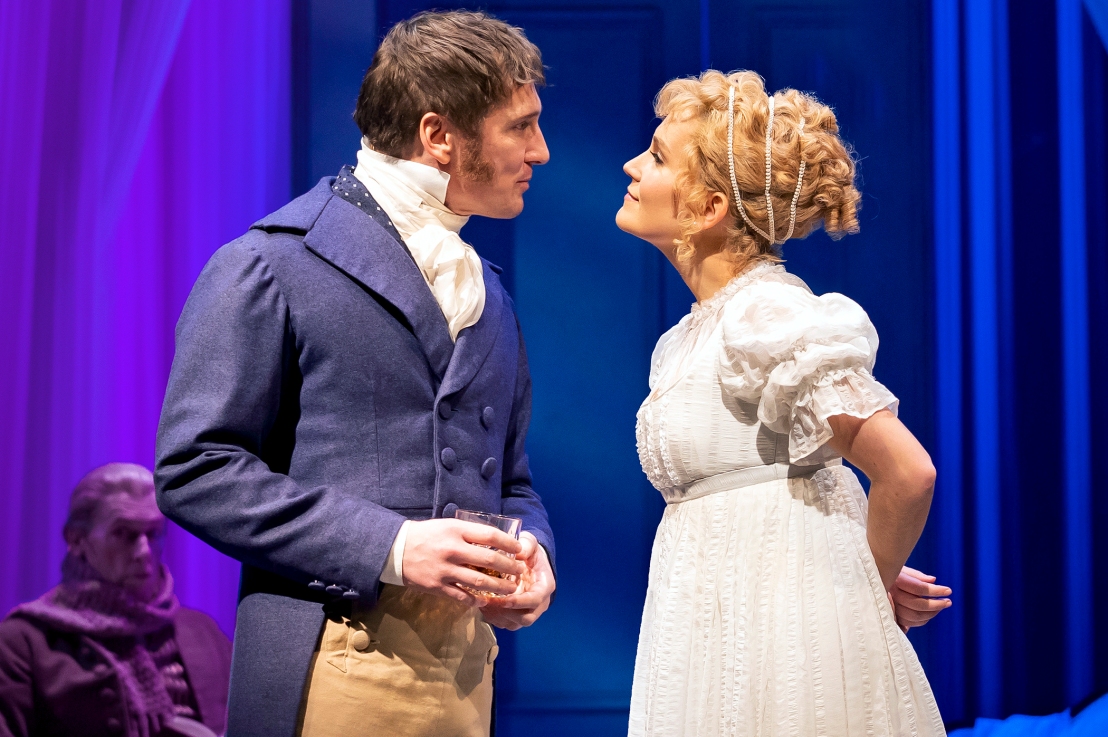 Paul Gordon’s musical adaptation EMMA, now making its Chicago debut at Chicago Shakespeare Theater, is lovely, whimsical, and thoroughly grounded in the Victorian England period in which Austen’s original 1815 novel is set. Under the direction of Chicago Shakespeare’s Artistic Director Barbara Gaines, the whole production has an airiness to it. Gordon’s score and lyrics seem to float up from the performers. The score exudes a charm befitting Austen’s particular kind of sly social commentary and satire. Music director Roberta Duchak ensures that the band performs the music with this same lightness of being. Scott Davis’s set design, which is sparse and flanked by billowing curtains and chandeliers that dangle from the ceiling, and Mariann Verheyen’s pastel costume designs, further inform the overall loveliness of EMMA.

While Gordon’s compositions are not necessarily the most distinctive, he makes excellent use of musical motifs to develop character and move the core players in EMMA on their narrative journeys. As befits the self-important and meddling central character, Emma’s motif is established in a number titled “I Made The Match Myself,” and she often cuts into other characters’ numbers with variations on this particular piece of music. It’s a clever move, highlighting Emma’s deep desire to advise others and be involved in their personal affairs—even when she may have no business meddling and even if the advice she gives may be unfounded. Mr. Knightley’s motifs, on the other hand, are far more balladic and slower paced. This creates a delightful musical contrast between the two, which highlights Emma and Mr. Knightley’s abilities to see through one another. And for Emma’s close friend Harriet Smith, Gordon has similarly composed a suite of songs that convey her earnestness and sincere kindness.

While EMMA’s ensemble offers plenty of talent and charm, I would be remiss not to mention that this production has an all-white cast. As Austen’s EMMA is, of course, a work of fiction, I see no reason why Chicago Shakespeare could not have assembled a more diverse cast. This appears to be an oversight in the overall casting of the ensemble.

That said, many of the individual players in EMMA are splendid and highlight the talents of some of the city’s delightful comedic and musical theater performers. Lora Lee Gayer plays Emma as every bit the busybody she must be, but she also endears herself to the audience. Gayer leans into Emma’s truths with full force, which is necessary to make the satire work; it’s quite clear to the audience that Emma’s schemes are misguided, but Gayer makes Emma’s arc one of true self-discovery. She plays Emma with confidence, and vocal command, but she also convincingly peels back the layers from the character’s surface once Emma discovers that she, too, may be vulnerable to the unpredictability of love. Brad Standley complements Gayer well with his take on Mr. Knightley, nailing the character’s balance between the need to be always polite and presentable combined with an unabashed straightforwardness when it comes to speaking his mind. Standley demonstrates that Mr. Knightley’s not all polish, however, in the heartwarming ballad “Emma.”

The supporting players are similarly entertaining in EMMA. Ephie Aardema is a veritable scene stealer as Harriet Smith with her delectable timing and character choices, but it’s her earnest integrity that seals the deal on the performance. Though the part of Emma’s absurdly hypochondriacal father Mr. Woodhouse is rather small in the musical, Larry Yando is an ideal match for the role and milks it for maximum humor. Yando’s wry brand of comedy suits Mr. Woodhouse’s valetudinarian ways pristinely. Dennis William Grimes amuses as the social-climbing vicar Mr. Elton. The always excellent Bri Sudia adds even more humor to the second act with her larger-than-life take on Mrs. Elton.

EMMA is a light-hearted evening of musical theater. The musical captures Jane Austen’s particular brand of social commentary well in bringing the meddling character of Emma to life. But the musical’s ultimate effect is in its ability to delight and amuse audiences and keep the overall tone cheerful.