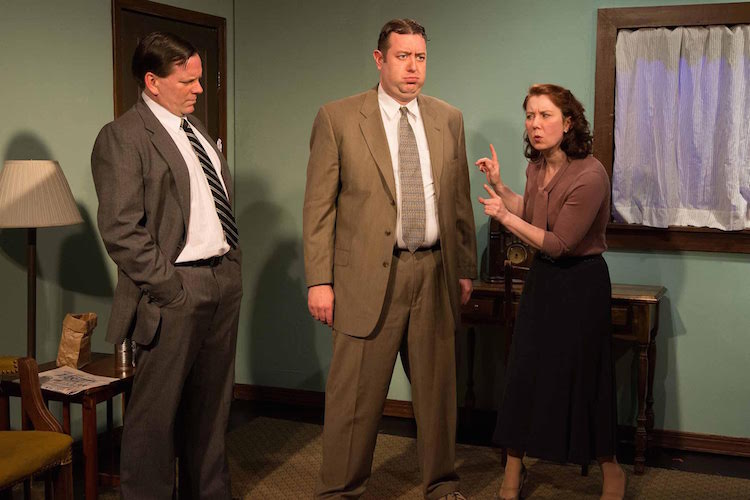 For Strawdog Theatre Company’s final production in its Broadway home, the company fittingly presents George S. Kaufman and Moss Hart’s 1930 comedy ONCE IN A LIFETIME—both play and production are rife with charm and sly winks to the audience. Director Damon Kiely’s choice to stage this particular Kaufman and Hart comedy is also an intriguing one. ONCE IN A LIFETIME chiefly concerns itself with the changes to the entertainment industry after the appearance of the first “talkie” (a film with spoken dialogue) and a frantic trio of three former vaudeville performers—May, George, and Jerry—who scramble to Hollywood hoping to strike it rich. And just as Jerry contemplates what these new “talkies” will mean for the future of the “legitimate stage,” so too do we now find ourselves on the precipice of immense change for the film and entertainment industry.

Indeed, the art of movie-making and the practice of going to the theater is shifting in this age of Netflix streaming—and once again those in the film business must ponder how to keep up. It’s incredible to think that it’s been fewer than 100 years since the debut of 1927’s THE JAZZ SINGER—the very first talkie—and that the nature of film has changed so much since. Film buffs will undoubtedly enjoy the countless cultural references to the early days of film in ONCE IN A LIFETIME.

The pressure May, George, and Jerry feel at the changing times they face in ONCE IN A LIFETIME nicely mirrors the present moment. Kiely’s production does well to highlight this parallel by incorporating some twenty-first century touches. Namely, the ensemble of 13 performers (many of whom take on multiple roles, as the play calls for some 40-odd characters) perform 1920s-style arrangements of many contemporary songs. These musical numbers function as a comment on the quest for fame and money that the protagonists seek. These numbers include some songs that overtly refer to Hollywood, including “Party in the USA” and “California Girls.” It’s an interesting and charming gimmick. The result is mixed, however, as much of the ensemble can’t quite meet the vocal demands (though it’s worth noting that actors Justine C. Turner and Sarah Goeden have great voices).

In terms of the acting, Kiely’s ensemble wins every moment. Kathleen McDonnell triumphs as leading lady May, who proposes to start a school in which to train aspiring Hollywood actors in the art of elocution. McDonnell captures all of May’s determination and crafty methods to achieve success. She also makes us feel for her character, who above all, just wants Jerry to propose marriage after several years of courtship. Scott Danielson lands the laughs as the daft and clueless George. As aspiring actor and equally ditzy personality Susan, Goeden provides a great counterpart as George’s love interest. Mike Dailey infuses charisma in the relative “straight man” role of Jerry. As renowned film critic Helen Hobart, Turner’s outsized performance earns some of the biggest laughs of the evening. Also of note: Michaela Petro and Anderson Lawfer as a dynamic comedic duo. The two perform a range of roles throughout the evening together, including hilarious turns as wannabe stars and inept pupils in May’s elocution school (with Lawfer in drag).

Overall, ONCE IN A LIFETIME makes for an affable evening at the theater that’s always charming, occasionally laugh-out-loud funny, and steeped in nostalgia for an era gone by.