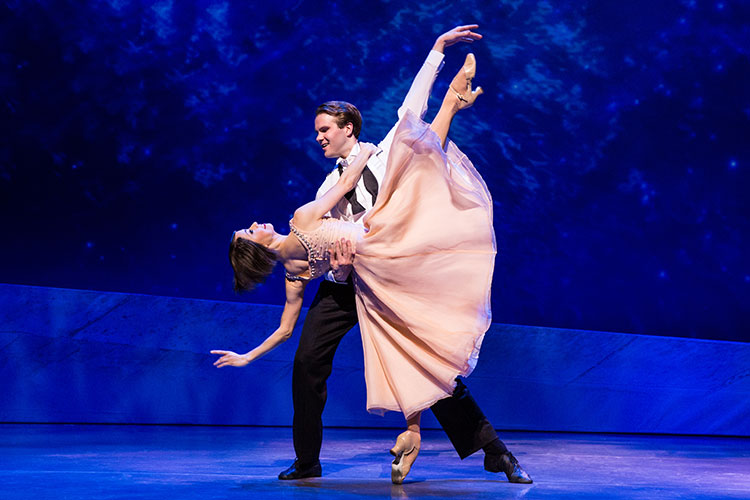 Christopher Wheeldon’s visually stunning production of AN AMERICAN IN PARIS has come dancing into Broadway In Chicago’s Oriental Theatre. Wheeldon’s complex and extensive choreography is the most striking and entertaining element of this new musical, based upon the classic Gene Kelly film and with a new book by Craig Lucas that weaves together George and Ira Gershwin’s lush song catalog. AN AMERICAN IN PARIS enjoyed a successful Broadway run in 2015, and this touring company can certainly keep up with Wheeldon’s moves as well as the original ensemble.

Lucas’s book finds the musical’s characters contemplating the City of Light in the post World War II era, in which self-assured war veteran and ex-pat Jerry Mulligan (McGee Maddox) decides to stay and make a go at life as an artist. Jerry becomes fast friends with the American composer Adam Hochberg (Etai Benson) and local aspiring cabaret singer Henri (Nick Spangler, who along with Benson nails the Act Two showstopper “I’ll Build A Stairway to Paradise”). He also finds himself caught in a love triangle between the up-and-coming ballet dancer Lise (Sara Etsy) and the well-to-do Milo Davenport (Emily Ferranti).

Although the musical’s setting intends to evoke pathos, AN AMERICAN IN PARIS feels emotionally distant. This production is a beautifully crafted visual wonder, but the emotional weight of the story did not fully cohere for me. This may be partly because Maddox has a dance background rather than a musical theater one, and his acting performance doesn’t make him a vulnerable protagonist. He’s a smooth and compelling dancer, but his vocals and acting are onl adequate. Maddox’s Jerry, who is supposed to play a role in forming the show’s emotional center, often feels too self-assured. This makes it seem all the more unlikely that the shy Lise would fall for him. Etsy gives a much stronger performance both vocally and acting-wise, and both Benson and Spangler knock it out of the park in this respect.

By far, Wheeldon’s dazzling choreography is THE reason to see AN AMERICAN IN PARIS, and particularly the titular ballet, which intersperses traditional ballet movement with whimsical jazz influences. Maddox and Etsy’s spectacular pas de deux here gives audiences a moment in which we feel real chemistry between the two performers. They move gracefully and seamlessly together. Of the two, though, Etsy is the more compelling performer overall. She shows us Lise’s tender heart and dances seemingly without effort. Etsy makes it all look easy choreography-wise, while also bestowing a haunting vulnerability to her character.

If you’re in the mood for unique, sublimely delivered choreography and love a good Gershwin tune, AN AMERICAN IN PARIS will satisfy nicely.

The Broadway In Chicago engagement of AN AMERICAN IN PARIS plays through August 13 at the Oriental Theatre. For tickets and more information, visit BroadwayInChicago.com.