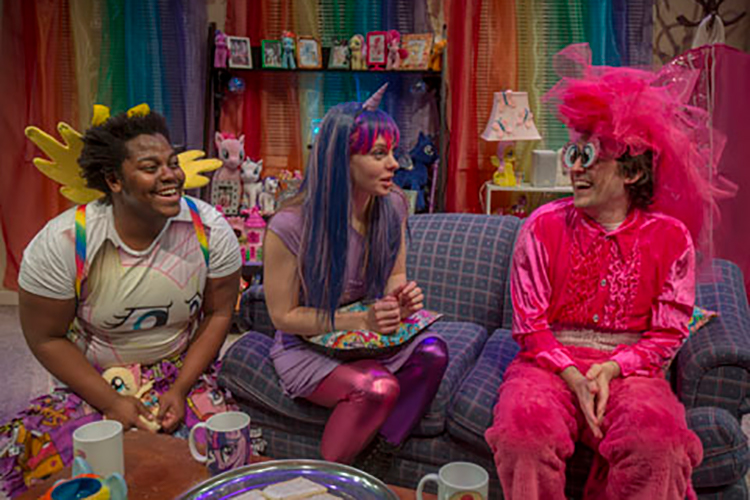 Eric John Meyer’s world premiere play THE ANTELOPE PARTY opens on a meeting in an apartment setting notable for its vast and bright collection of MY LITTLE PONY memorabilia (kudos to set designer Joe Schermoly and properties designer Jesse Gaffney for this delightful visual). In this moment, we meet the members of the Rust Belt Brony Meet Up group. The bronies (sometimes referred to as Pegasisters when they’re female-identifying) are adult fans of the children’s show MY LITTLE PONY. The members of the Rust Belt group, in particular, identify with the show’s messages of magic and friendship and find solace among their brony counterparts.

The play introduces us to the meeting’s host Ben (Edward Mawere), who laments that he cannot wear his MY LITTLE PONY outfit in public. We also meet Shawn (Will Allan), who is dressed head-to-toe in a spectacular Pinkie Pie costume that’s a stunning burst of hot pink (magnificent costume work by Karen Krolak). The play also introduces us to Doug (Evan Linder), and the shy and caring Rachel (Annie Munch). But Pegasister Maggie (Anu Bhatt) brings an uncomfortable twist into the safe space of the brony group: she has recently become entangled with the new neighborhood watch, who pulled her aside as she was wearing her pony costume on the streets.

In this manner, Meyer sets up the dichotomy at the core of THE ANTELOPE PARTY from the beginning. The play’s exploration of identity and belonging demonstrates that those two needs can be both comforting and destructive at the same time. As the neighborhood watch grows in numbers and also develops stronger ideology, referring to themselves as “The Antelope Party,” the bronies find themselves forced to choose if they will accept the protection of this new party or if they will stand by the decidedly friendlier values espoused in MY LITTLE PONY.

Meyer clearly intends THE ANTELOPE PARTY to be a cautionary tale, and he succeeds in setting up the human need for belonging as a double-edged sword. As the play unfolds, the bronies make dramatically different choices in how they respond to the rise of the Antelope Party, which becomes alarmingly fascist in nature. Some bronies embrace the sense of security and power that the neighborhood watch provides, while others struggle with what it would mean to submit.

Under the helm of Theater Wit Artistic Director Jeremy Wechsler, THE ANTELOPE PARTY has a stellar ensemble to bring Meyer’s work to life. Will Allan embodies every moment of Shawn’s awkwardness and makes achingly clear that the brony group is the one place where Shawn feels at home. As he becomes entangled with the Antelope Party, Allan also undergoes a stunning transformation that is positively unnerving. Edward Mawere gives a spirited turn as Ben, who wholeheartedly sells his character’s devotion to the culture of MY LITTLE PONY. Munch displays a quiet determination as Rachel, and she is mesmerizing to watch on stage. Bhatt is compelling as Maggie, showing us her character’s struggle to decide if her allegiance lies with the bronies or the neighborhood watch. Linder lends both vulnerability and strength to his portrayal of Doug. And as meeting interloper Jean, Mary Winn Heider displays superb comedic timing in the two scenes in which she appears.

Overall Meyer has certainly given THE ANTELOPE PARTY a timely message that Theater Wit’s ensemble effectively conveys, but it is also an incredibly explicit one. Meyer’s desire to explore the play’s central themes and the dangers of the new neighborhood watch also threaten to eclipse the play’s examination of brony culture. The play’s earlier scenes give us many humorous and illuminating moments as we are given the opportunity to learn more about the lives of the bronies, but this lightheartedness and unique material rapidly disappears.

THE ANTELOPE PARTY runs through February 24 at Theater Wit. Tickets are $28-$70. Visit TheaterWit.org to learn more.