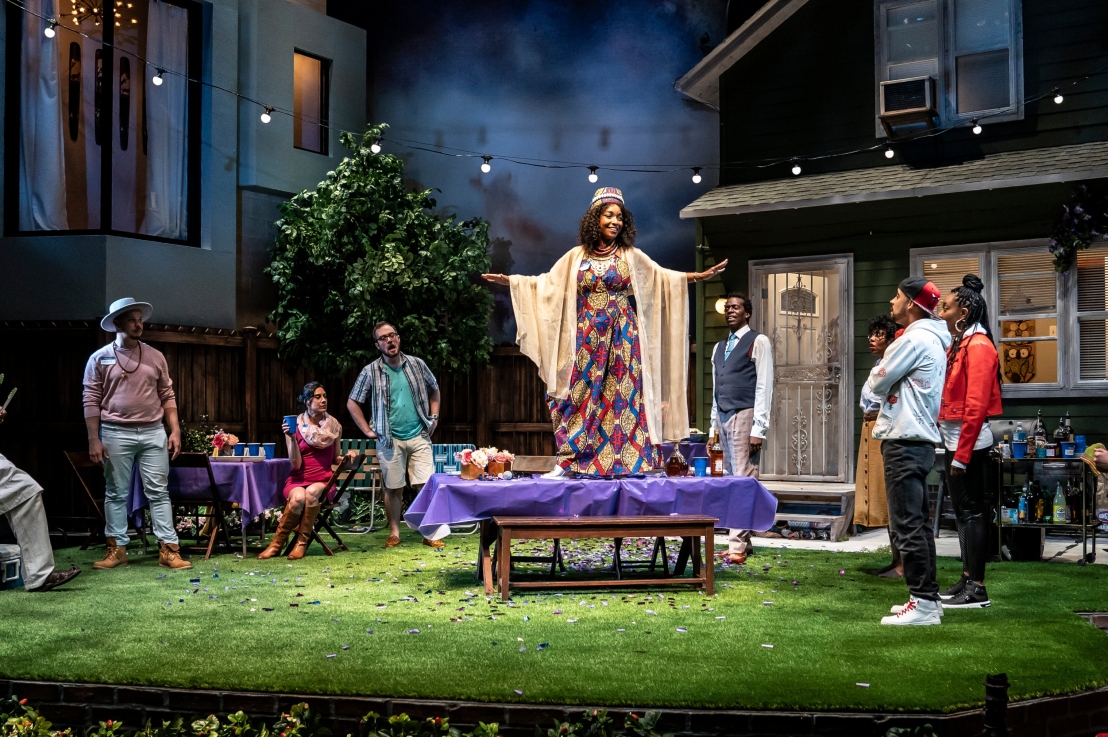 It seems only fitting that Ike Holter would conclude his seven-play “Rightlynd Saga,” set in the fictional 51st Ward of Chicago, by literally sending it off with a party. And this is no ordinary celebration. A cast of characters from previous installments in the “Rightlynd Saga” gathers in Mallory’s backyard; she’s the neighborhood’s maternal figure, and she’s poised to give away a sizable sum of money to one lucky winner. The play itself mirrors the energy of Mallory’s boisterous gathering; the overall tone of the piece is cacophonous, with characters often shouting and talking over one another so that some lines of dialogue are intentionally indiscernible.

But in the midst of all this celebration, LOTTERY DAY has a melancholy sense of finality: both as audiences bid farewell to the play cycle and as Mallory comes to terms with a terrible tragedy that struck her family in the very backyard in which she’s now hosting this event. It’s a testament to Holter’s playwriting abilities that he easily toggles between the joyous and somber tones of the play.

Like the other installments in the “Rightlynd Saga,” LOTTERY DAY explores broader themes about the neighborhood’s changing dynamics in the face of gentrification. As Ricky (Pat Whalen), the former public-school assistant principal from Holter’s EXIT STRATEGY, remarks, “Neighborhoods change.” Robinson (Robert Cornelius), the owner of a local car repair shop, cheekily responds, “People change neighborhoods.” That exchange so brilliantly encapsulates much of what Holter has explored in the saga as a whole. The long-time residents of Rightlynd are often (and rightfully) resistant to the changes they see in their neighborhood as it becomes ever more gentrified, but it’s also the residents both new and old that are the catalysts for that change.

In LOTTERY DAY, we see this tension embodied beginning with the production design.

Arnel Sancianco’s set design puts Mallory’s sprawling backyard and old-school Rightlynd home front-and-center, but it’s flanked on one side by the contemporary and clearly expensive home of new resident Vivien (Michele Vazquez). Vivien’s house is elevated, such that when she peers through her curtains (and she often does, as she’s quite the snoop), she looks down on Mallory and her frequent house guests. Samantha C. Jones’s costume designs also demonstrate the contrast between the long-term residents of Rightlynd, those who have moved out of the neighborhood, and of course, Vivian’s decidedly snobbier style. Andre Pluess’s sound design underscores the play’s raucous energy.

For those who have seen other plays in Holter’s saga, one of the most exciting elements

of LOTTERY DAY might be the roles in which they play here—with many of the same actors once again assuming those roles. Though LOTTERY DAY functions as a standalone play, it has tons of Easter eggs from the six other plays in the cycle. Under the direction of Lili-Anne Brown, the cast really comes together as a neighborhood. As Mallory, J. Nicole Brooks ensures her performance anchors the production, just as her character provides much needed support for the neighborhood’s residents. She finds a balance between Mallory’s commanding presence (perhaps sometimes a façade) in front of the people of Rightlynd, while also showing us the emotional struggle that lies beneath that surface. As her close friend Avery, James Vincent Meredith gives a reliably grounded performance. Reprising her role as stage manager and now artistic director from the local storefront theater Red Rex, Aurora Adachi-Winter has a hilarious and manic presence as Tori. It’s great fun to see how Tori’s fervent desire for order manifests during Mallory’s chaotic gathering. They’re also joined by the sensible Cassandra (McKenzie Chinn), neighborhood advocate Zora (Sydney Charles), aspiring musician Ezekiel (a hilarious turn from Tommy Rivera-Vega), and convenience store owner Nunley (Tony Santiago). On the whole, the ensemble doesn’t miss a beat and frequently shift between the play’s many emotional highs and lows.

With LOTTERY DAY, Holter sends off his seven-play cycle in style. And just as Mallory’s party signals the culmination of these plays, so too does the event signal a send-off to Rightlynd as it once was. The parting here is not just with Holter’s multi-play narrative but also a goodbye to a neighborhood that cannot stay the same in a city of constant change—for better or worse.