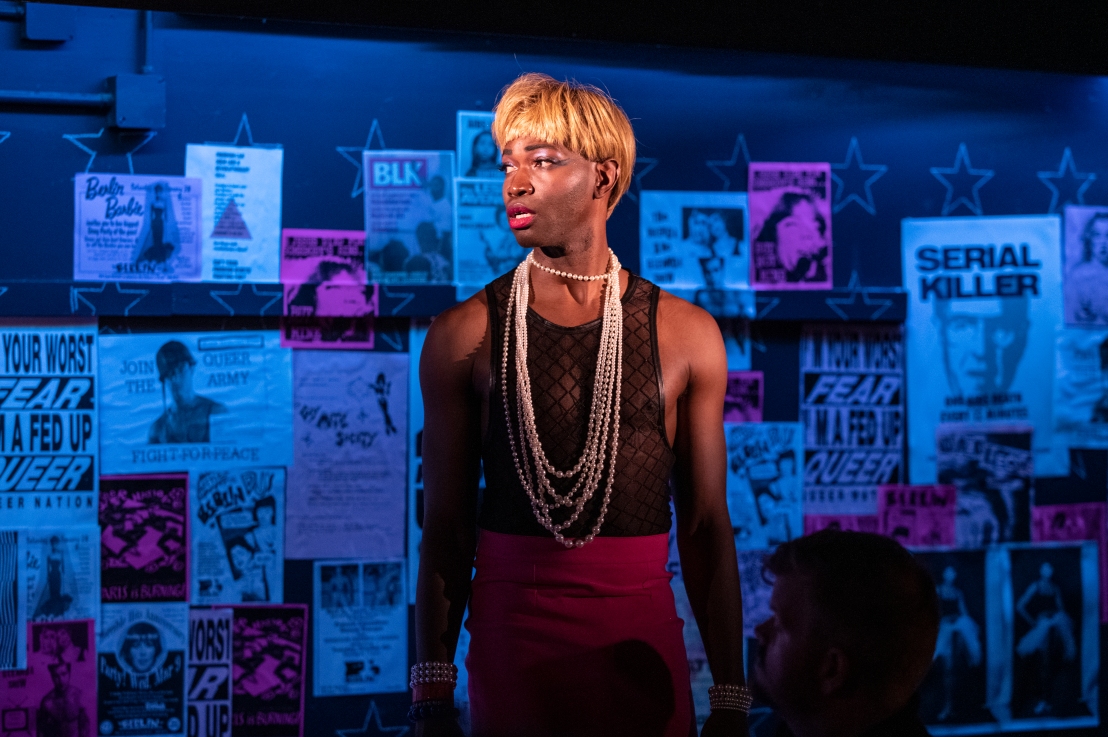 With MS. BLAKK FOR PRESIDENT, co-creators Tina Landau and Tarell Alvin McCraney have created a raucous and welcoming celebration of Queer culture by bringing to life a true story that few audience members might have known previously. The play’s title refers to Joan Jett Blakk (given name: Terence Alan Smith), a drag queen who ran first for mayor of Chicago and then for President of the United States in 1992. By staging a piece about Blakk, McCraney and Landau have poetically brought forward a story that might otherwise have been forgotten by the general populace, just as many American citizens who identify as Queer are often erased from consideration and representation in this country. MS. BLAKK FOR PRESIDENT fully explores this issue of erasure without making the production one that’s defined by tragedy.

Instead, perhaps one of MS. BLAKK FOR PRESIDENT’s greatest strengths is that it is an out-and-out joyous occasion. The piece’s experimental form defies easy categorization, and it does not follow a traditional play structure, but it wholly succeeds in capturing a feeling. Set designer David Zinn has totally transformed Steppenwolf’s Upstairs Theatre into a venue fit for the most extravagant of parties. Every inch of the theater space is covered with posters, fliers, and other decorations. In lieu of a traditional stage, a large runway zig-zags through the center of the venue. Audience members who want to be at the center of the party can choose to sit at cabaret tables flanking either side of the runway, or grab a seat right alongside the runway itself. Toni-Leslie James’s magnificent costumes further contribute to the party atmosphere at the Upstairs Theatre, and she’s particularly succeeded in recreating the American flag dress that Blakk famously wore on the floor at the 1992 Democratic National Convention.

The atmosphere created for MS. BLAKK FOR PRESIDENT is magnetic and welcoming. The show begins with a flurry of pre-show activity, as ensemble members take to the runway to show off their spectacular dance moves (Daniel Kyri and Sawyer Smith are particularly gifted in this area). This party atmosphere is thrilling, but it’s ultimately the performances and the deeply human nature of this story that make MS. BLAKK FOR PRESIDENT so resonant. McCraney portrays the lead role of Joan Jett Blakk/Terence Alan Smith, alongside a superb ensemble who each essay a variety of parts. Patrick Andrews plays Blakk’s pseudo campaign manager Mark, a fervent advocate for Queer Nation who longs for nothing more than to see the government finally take meaningful action to end the AIDS crisis. Andrews’s portrayal of the role demonstrates the gravity of the situation, providing a grounding to the outsized celebratory nature of the production. Molly Brennan supplies her signature brand of humor, particularly in the role of Lenny. In addition to showing off his dance moves, Kyri has a lovely turn as JJ, Blakk’s friend who is eager to document the proceedings of the presidential campaign. Jon Hudson Odom particularly shines as Glennda Orgasm, finding the balance between the character’s outsized drag personality and her integrity and desire for representation on the DNC floor. Smith’s role in the program is identified only as “Q,” and they serve as an imaginary guiding light for Blakk, appearing especially in moments of vulnerability.

At the center of it all is McCraney, who bestows so much heart to his dual roles. As Blakk, McCraney exudes confidence and an outspokenness worthy of a political candidate with a unique and much needed platform. When McCraney takes off the make-up and heels and appears onstage as Smith, however, we see the vulnerability that lies beneath. McCraney makes clear that for Smith, becoming Joan Jett Blakk doesn’t simply mean taking on a persona. Rather, Blakk is another side of Smith, both in terms of his gender identity but also in terms of empowering him to feel confident and face the difficult realities of life. McCraney finds that balance and demonstrates that both Blakk and Smith are equally integral, two sides of the same coin.

While MS. BLAKK FOR PRESIDENT’s narrative flounders in certain points, the play’s integrity never flounders. Watching the play unfold, there’s no denying the relevance of the issues that Blakk faced in 1992 to today’s society. But the play brilliantly conveys that resonance while also still maintaining a light-hearted and celebratory tone worthy of the story that it portrays.