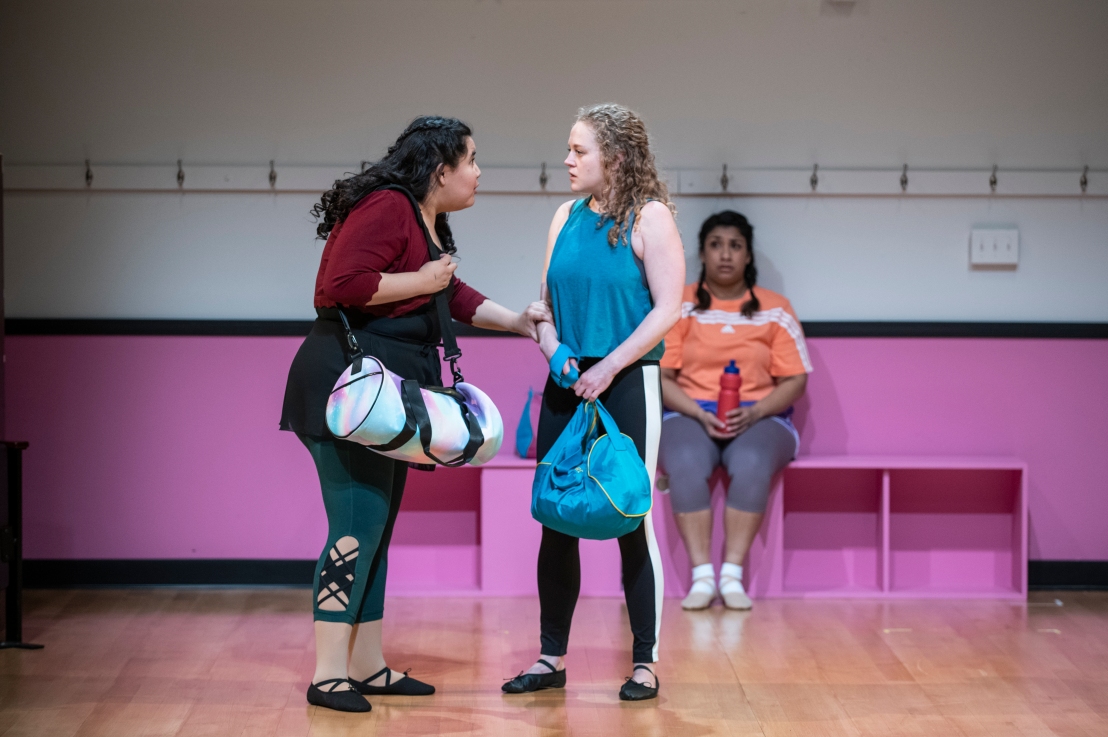 The Chicago premiere of Clare Barron’s DANCE NATION, now at Steppenwolf with direction and choreography from Lee Sunday Evans (who also helmed the original production at Playwrights Horizons), is alternately wild, messy, and confusing—much like the experience of early adolescence for the play’s characters. Some moments of Barron’s script beautifully capture the growing pains of what it’s like to be 12 or 13 years and learning how to navigate the terrain of changing bodies and the shifting dynamics of pre-teen friendships. Stylistically, DANCE NATION is all over the place. The play’s opening scene features the cast tap dancing in sailor suits, transporting audiences to the fierce world of competitive pre-teen dance. It’s heightened and satirical, seemingly a mockery of shows like DANCE MOMS.

But DANCE NATION also has scenes rooted in realism, and then many that are undoubtedly experimental. The play has wild pendulum swings between these styles, veering between them with little transition. Adding to the play’s overall heightened style is that female adult actors (and one man) ranging in age play the pre-teen dance troupe members. It’s a compelling casting choice, in that it calls attention to the presentational nature of theater and the dance competition around which the play centers. But it also feels very real, in the sense that life itself is one giant transition, just like the ones the characters experience.

In bringing the Liverpool, Indiana dance troupe to life, Steppenwolf has assembled some great talents. Caroline Neff is superb as Zuzu, who longs to make it big as a dancer but knows in her heart she’s not as technically skilled as her best friend Amina (Karen Rodriguez, simultaneously cheerful and vulnerable). And while DANCE NATION is not necessarily a conflict-based play, the tension between Zuzu and Amina embodies one of the lessons that the dance troupe is learning: In order for someone to win, someone else must lose—and what exactly does that mean for young friendships? Tim Hopper is delightful as the dead serious Dance Teacher Pat, who reminds the team that they must win if they wish to be remembered. Audrey Francis is also excellent as the collective Moms. And while DANCE NATION is in part a satire, the parental figures in the play mostly lead with heart and true concern.

While scenes such as the critical conversation between Zuzu and Amina following a dance competition ring true, some of the more experimental moments in DANCE NATION feel less earned. Barron has worked a series of lengthy monologues into the script for almost all of the characters, which take place achronologically. The monologues vary in content and tone and pop up at various points in the play. Some of the scenes are surprisingly bloody for a play about pre-teens, and some of the language feels extraordinarily coarse given the characters’ ages. While I know pre-teens are wont to experiment with explicit language, I personally didn’t know anyone at age 12 who used the “p” and “c” words quite so frequently to refer to certain anatomic parts. Shanésia Davis’s monologue as Ashlee is particularly jarring. Davis delivers it confidently and powerfully, but I question whether the monologue’s female empowerment concepts could really be grasped by such a young character. Similarly, some of Evans’s spontaneous dance sequences, while amusing, do not necessarily gel with the rest of the production.

While DANCE NATION captures the growing pains of early adolescence in a compelling manner, the play’s wide range of styles and piecemeal scenes do not entirely cohere.