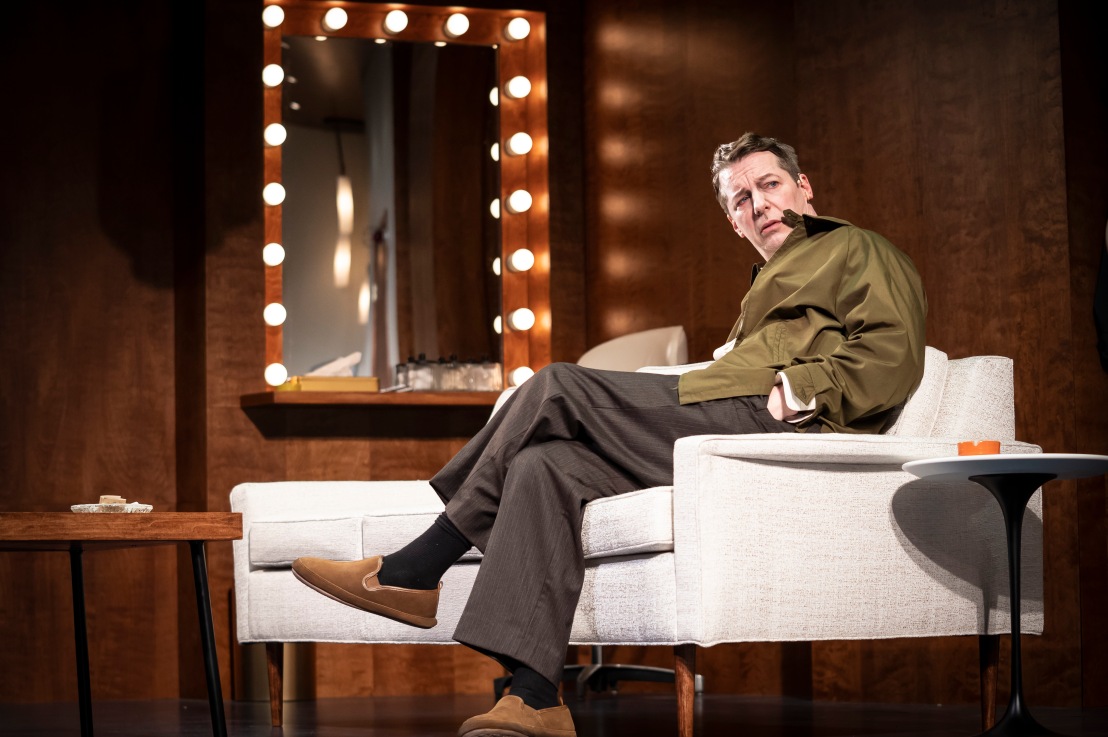 Doug Wright’s GOOD NIGHT, OSCAR, now in its world premiere production at Goodman Theatre, is an engaging play that brings the story of one infamous night in the life of Oscar Levant to the stage. As the drug-addicted and depressed Oscar, Sean Hayes (perhaps best known for his role on WILL AND GRACE) gives a magnetic performance that reflects the man’s immense capacity for humor and his musical genius but also his deep insecurities. While Wright’s script doesn’t necessarily wade into new waters in terms of set up and the unfolding of the play’s events, Hayes’s central performance is a magnificent character study. Hayes is every bit as compelling a stage performer as one might expect, and GOOD NIGHT, OSCAR affords him the opportunity to showcase his formidable talents in some familiar and surprising ways.

The play centers on one night in 1958, in which Oscar is granted temporary leave from a long-term stay at an in-patient institution, where he is undergoing treatment for drug addiction, depression, and obsessive compulsive disorder, so he can appear on TONIGHT STARRING JACK PAAR. Over the course of one night, we see Oscar grapple with his addiction and his mental health struggles, the ghosts of his past (particularly that of George Gershwin, who appears before Oscar in hallucinatory flashbacks), and his relationship with his wife and family. And, of course, once Oscar goes live on air with Jack, the discussion does not go nearly as smoothly as network executive Bob Sarnoff might hope. Oscar’s a loose cannon, both a brilliant comedian and also someone who uses humor as a powerful defense mechanism. As a result, his conversation with Jack incorporates many of Oscar’s signature quips and the entirely “taboo” topics of politics, religion, and sex.

While those topics might not feel so radical for modern popular culture, GOOD NIGHT, OSCAR also probes the question of why American media was so reluctant to address those issues head on; even now, we see the vestiges of dancing around such topics in the media we consume. Wright’s script succeeds in using Oscar and Jack’s willingness to embrace those traditionally taboo topics head on to probe why they have so long been eschewed in American popular culture.

While Oscar’s life may be extremely messy and the pressures of his fame and his mental health struggles clearly take a toll, Wright’s playwriting is tight, neat, and conventionally structured. Lisa Peterson directs a first-rate ensemble of actors with talents to match Hayes’s nuanced and commanding central performance. Peter Grosz is spot-on as television executive Bob Sarnoff, who clearly wants the night to go smoothly above all else and maintain the network’s pristine reputation. Ben Rappaport is lively and personable as Jack Paar; he easily captures the rehearsed and refined charisma of a late-night talk show host but also gives us hints at the rebellious personality that lies underneath the character’s slick exterior. Ethan Slater has an bubbly and precisely earnest energy as Max Weinbaum, a network intern who is elated to be in front of one of his favorite movie stars; though the dialogue for Max’s role feels familiar, Slater provides energy that gives the role a grounded realism. John Zdrojeski, appearing in flashback, is charming and wry in the role of Gershwin. Zdrojeski and Hayes have a natural rapport that serves as a reminder of the strong friendship between Oscar and Gershwin. Tramell Tillman is lovely as Alvin Finney, Oscar’s minder for the night who has aspirations of attending medical school. Although in the script Tillman’s role is not necessarily the most exciting, Tillman provides a grounding energy that helps him become a calming presence in the midst of the storm that is Oscar Levant.

As the sole female character, Emily Bergl is powerful as Oscar’s wife June Levant. Though some of June’s dialogue is too on the nose, Bergl makes the most of a part that feels somewhat underwritten. She plays the full range of June’s conflicting emotions, torn between an unconditional love for her husband and an immense anger and sadness at all the turmoil he has caused for her and their three daughters. It’s a wonderful example of turning dialogue that on paper feels somewhat two-dimensional into a more refined and moving performance on the stage; kudos to Bergl.

GOOD NIGHT, OSCAR is an unabashedly enjoyable experience, especially in the ways in which it infuses Gershwin’s iconic music into the play and the multi-layered character portrait of Oscar it presents. The play easily held my attention during its 100 minutes. For those nostalgic about 1950s Hollywood and the early days of prime-time television or for those who also are interested in plays that examine and question the conventions of popular media, GOOD NIGHT, OSCAR is a great exploration of that. Of course, I imagine many will want to see this play to take in Hayes as Oscar, and he absolutely delivers a performance worthy of that top billing. He’s a formidable performer and delightfully suited to the role in myriad ways.