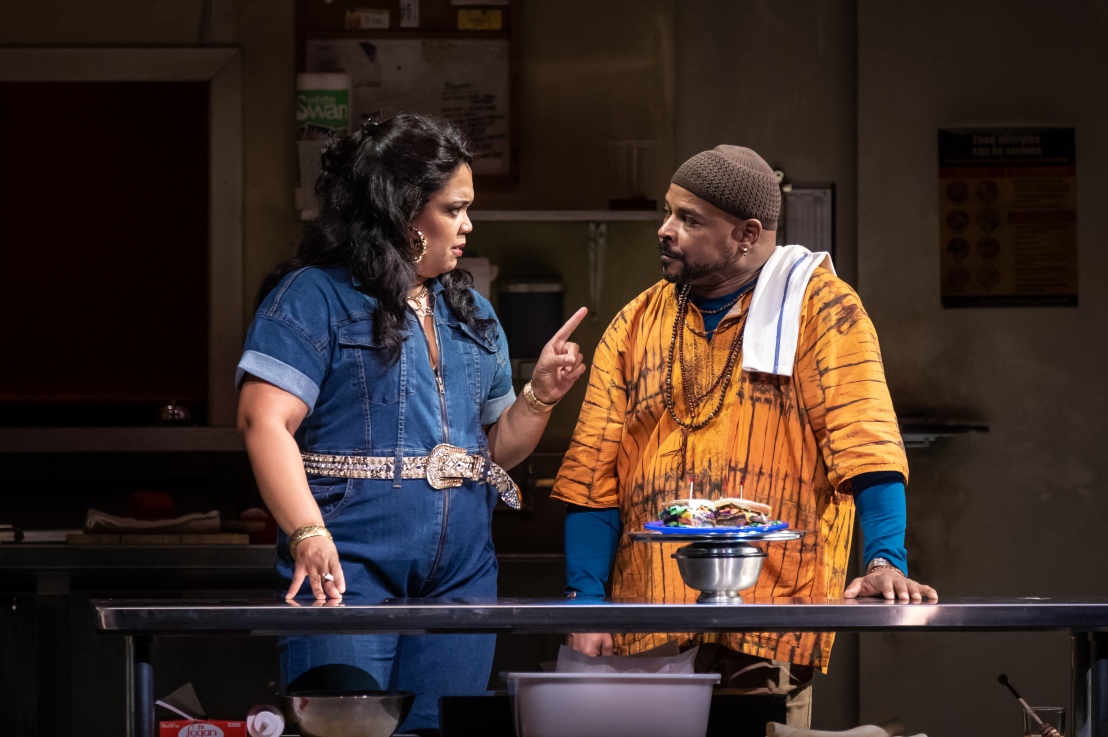 In CLYDE’S, playwright Lynn Nottage posits that salvation comes in the form of a sandwich…in more ways than one. Clyde, an ex-convict, runs her sandwich shop at a truck stop (expressively also referred to as a “liminal space” in the script) with an iron fist and a sharp attitude. She hires fellow formerly incarcerated employees to whip up sandwiches, and along the way, decide what they’re going to do next with their lives. Thus, CLYDE’S simultaneously pays homage to the transcendent nature of an excellent meal and also the transcendent experience of working at the sandwich shop. The former is a metaphor more grounded in realism; the latter takes the play into a more elusive state.

While Nottage doesn’t shy away from using CLYDE’S to expose some of the flaws within the United States prison system and touch on other dark elements of the characters’ lives including homelessness, violence, and drug use, the play is unabashedly a comedy—the real, laugh-out-loud kind. Nottage’s characters engage in witty repartee and poke gentle jabs at one another at a rapid fire pace…and no one nails the zingers more than Clyde herself. Under the direction of Kate Whoriskey, Goodman Theatre’s ensemble hits the ground running. On opening night, understudy Danielle Davis took on the titular role—she inhabits Clyde’s wicked sense of humor impeccably. Clyde’s outrageously funny, but she’s also slippery. Her most obvious foil is Montrellous (an earnest but not saccharine Kevin Kenerley), who believes in the power of a good sandwich. The good-hearted Montrellous is also the play’s sandwich master, and he’s constantly dreaming up new combinations to serve at Clyde’s. Single mother Letitia (Nedra Snipes) seems eager to get life back on track for herself and her daughter, but she also makes time for fun rapport with Rafael (Reza Salazar) and to spar with Clyde’s newest employee Jason (Garrett Young). Nottage’s script requires all the characters (less Clyde) to be both humorous and vulnerable. The success of the play depends on the actors finding that variation within the roles and that they do.

Takeshi Kata’s set design is an absolute delight, with so many details and surprises. Jennifer Moeller’s costume designs align well with each character’s personality, and Christopher Akerlind and Justin Ellington’s lighting and sound design, respectively, transition between the play’s more realistic and ethereal moments.

CLYDE’S has terrific pacing, switching from uproarious moments of humor to more introspective ones as the characters reveal more of their backstories. Tellingly, Clyde herself reveals the least about her background, while Montrellous wears his heart on his sleeve. This contrast—and the explicit reference to the play as “liminal space”—sets up a Freudian dynamic within the script. The Clyde’s employees need to decide how they’ll use this opportunity to move forward…or not. And while some elements of this id-ego-superego metaphor seem a bit too pronounced in the play, the more gentle message about food’s power to transform and inspire always resonates. And the play’s tasty sense of humor will leave audiences wanting even more. Like a well-constructed sandwich, CLYDE’S has all the ingredients to deliver an impactful, emotional, and entertaining theater experience.