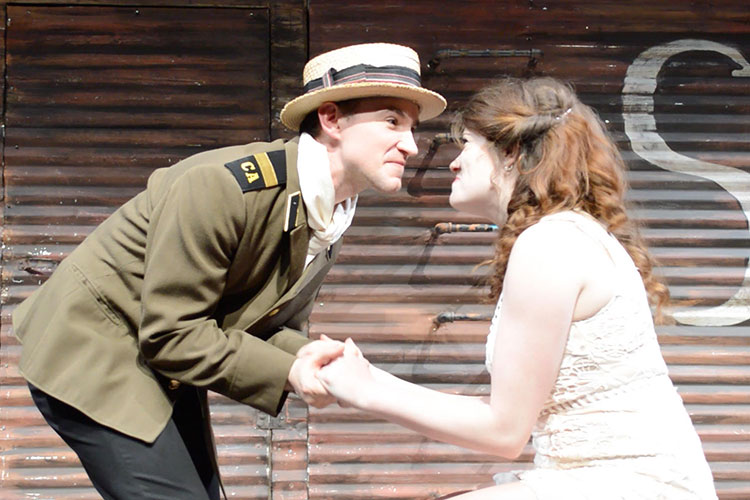 Porchlight Music Theatre’s three-night-only concert staging of the 1962 Broadway musical LITTLE ME as part of its Porchlight Revisits series is every bit as effervescent as a glass of champagne—and it’s certainly an evening of theater worth toasting. With a classic Broadway score by Cy Coleman, lyrics by Carolyn Leigh, and a charmingly nonsensical book by Neil Simon, LITTLE ME provides ample laughs and Porchlight’s talented ensemble embraces every single moment of this improbable and exaggerated musical. And while the acting may be comically heightened as befits the show, the ensemble takes the vocals quite seriously and they nail every note. With direction from Porchlight Artistic Director Michael Weber, this is a night of pure Broadway showtune pleasure, and I could not have asked for a better way to spend a rainy Tuesday night. Craig V. Miller’s choreography (with Jane Lanier’s guest choreography for “Rich Kids Rag” delightfully performed by students from Roosevelt University) is icing on this delicious confection of a staged concert.

LITTLE ME follows the young ingenue Belle Poitrine (played as a young woman by Elya Bottiger and as an adult by Genevieve Thiers) as she attempts to cross over from “The Other Side of the Tracks” so she can gather wealth, culture, and social position to win the man of her dreams—the privileged heartthrob Noble Eggleston (Matt Crowle). As Belle makes her ascent to the top—and the bottom—and back again, she encounters a series of curious men along the way who help her on her path—all of whom are again played by Crowle.

While the entire ensemble deserves kudos here, special attention must be given to the two leading ladies of the night. Bottiger, who is currently a senior at Columbia College, handles the role of Belle with the chops of a seasoned professional. She’s a phenomenal character actor who milks all her moments onstage and delivers stunning vocals throughout LITTLE ME’S entire journey. As Older Belle, Thiers also fares smashingly and displays her incredible vocal prowess. Bottiger and Thier’s second act duet—the show’s title song—is easily a highlight of the evening.

But of course the most compelling reason to see LITTLE ME would be Crowle’s jaw-dropping comedic performance as all of the men in Belle’s life. As he rapidly switches between Shelby Brand’s lovely costumes, Crowle also has developed a distinct physicality and persona for each of his roles—and sometimes must switch between them in just a few seconds. Crowle’s comedic timing is nothing short of expert, and he’s a magnificent singer and dancer. He’s sincere and charming as Noble, perfectly miserly as the greedy octogenarian Mr. Pinckley, and completely brought down the house as the sickly Prince Cherney in “Goodbye (The Prince’s Farewell).” Crowle certainly steals the show, but he’s also a generous performer and gives Bottiger moments to shine alongside him in their duets.

Porchlight Revisits LITTLE ME is a dazzling musical delight—it’s frothy and fun, supremely well-executed. Musical theater lovers in Chicago should be clamoring to see Crowle take on the roles originated by Sid Caesar—and he’s certainly in good company with Porchlight’s ensemble.

Porchlight Revisits LITTLE ME has performances on March 1 and 2 at Stage 773. For more information, visit PorchlightMusicTheatre.org.