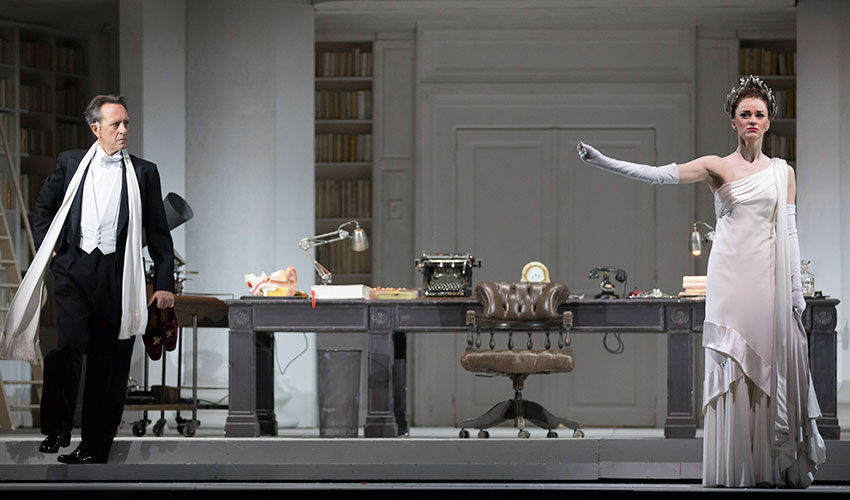 Alan Jay Lerner and Frederick Loewe’s 1956 classic Broadway musical MY FAIR LADY has some of the most iconic tunes in the American song catalog. And, of course, relays that tempestuous relationship (perhaps romantic, perhaps not) between the egocentric and language-obsessed Professor Henry Higgins and Eliza Doolittle, a Cockney flower seller with aspirations for more. Higgins strikes up a bet with Colonel Pickering, also a language expert, that he can pass Eliza off as a lady of society within six months—and then, it’s off to the races as Higgins and Eliza spar along the way.

While this battle of wits might feel a touch dated to modern audiences, Robert Carsen’s keen production (a remounting of one staged at the Theatre du Chatelet in Paris, albeit with a new cast) largely ensures that that is not the case. For in Richard E. Grant’s smug and daffy Higgins and Lisa O’Hare’s spitfire and ever resilient Eliza, this MY FAIR LADY gives us a pair that could not be more well-matched.

Grant is a touch more clownish than other Higgins audiences may have seen. He’s egotistical and proper but also appears slightly unhinged. Grant’s giddiness lends some tongue-in-cheek flavors to numbers like “I’m An Ordinary Man,” which here becomes less a comment on the potential shortcomings of women and more an elaborate expression of Higgins’s self-congratulatory nature. For while Higgins is a grammar and knowledge snob, Grant also plays up his brash and impulsive side—he gesticulates wildly throughout his numbers, delivered in the “sing speak” traditionally associated with the role.

But Grant knows full well when to show Higgins’s more tender side. “I’ve Grown Accustomed to Her Face” here is a fully realized character study for Higgins. Carsen smartly stages this number outside of Higgins’s house—the same spot in which Eliza’s love interest Freddy Eynsford-Hill delivers the homage “On The Street Where You Live.” The parallel here is delicious, for it’s in that spot that Higgins realizes he, too, has come to care for Eliza. Grant’s whiplash of a performance here swings between Higgins’s vulnerable side and his desire to exude control. Unfortunately even Grant’s work cannot salvage “A Hymn to Him,” the one number that still feels uncomfy and mired in sexism.

While Grant’s performance is a master class in character development, this MY FAIR LADY truly belongs to O’Hare’s Eliza. She’s previously played the role in the West End and in a U.S. national tour, and it shows. O’Hare knows this role inside and out, but her Eliza never feels rehearsed. She has outstanding comedic timing, and in the earlier scenes, hems and haws with astonishing realism. To watch Eliza’s transformation is truly “loverly” and a legitimate 180. And while O’Hare isn’t afraid to dig into the grittier side of Eliza, she soars into each of her songs with effortless and polished vocals. O’Hare glides with ease between the two modes of Eliza and between coarse line deliveries and crystalline soprano notes. And just as her delivery beautifully essays this transition, so too do Anthony Powell’s decadent costumes, which O’Hare uses to help inform her character’s arc.

Just as O’Hare is so perfectly matched to Eliza, so too has the Lyric proven an excellent match for MY FAIR LADY. It feels like a dream to hear Loewe’s score delivered by a 37-piece orchestra, every note full and magnificent. The show uses an ample ensemble to deliver expert harmonies and maximize the potential of every melody in the musical. Lyric Opera owns all the advantages of staging a grand classic musical in an opera house, and this is a production that does not hold back in any area—it’s altogether opulent.

MY FAIR LADY also has other notable players of course. It’d be remiss not to mention Bryce Pinkham’s dazzling turn as Freddy Eynsford-Hill, whom Eliza meets at the Ascot horse races. Pinkham makes the iconic “On The Street Where You Live” a show-stopping moment—he puts so much heart into the song and also has powerful vocals that fill the entire opera house. His performance is not one to miss. Nicholas Le Prevost is an earnest and charming Pickering, eager to play along with Higgins’s games but also with a genuine affection for Eliza. As Eliza’s father Alfred P. Doolittle, Donald Maxwell makes solid work of “Get Me To The Church On Time” (and Lynne Page’s overall sprightly choreography is at its liveliest here).

While Lyric’s MY FAIR LADY is overall a rather traditional staging, that’s not at all a reason to shy away from this magnificent and larger-than-life production. The resources here are ample, the score sounds delicious on every note, and the finely delivered performances lend an immediacy to Lerner and Loewe’s story. Grant keenly understands his Higgins, and as the titular fair lady, Lisa O’Hare delivers a strong-willed and honest take on Eliza and stunning vocals.

MY FAIR LADY runs through May 21 at Lyric Opera. Learn more and buy tickets at LyricOpera.org.