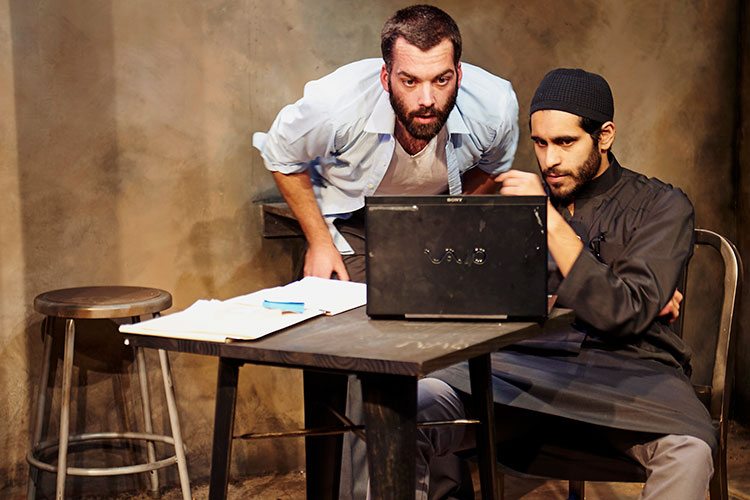 Akhtar’s work was previously seen in the summer and fall of 2015, respectively, at Victory Gardens Theatre (THE WHO AND THE WHAT) and Goodman Theatre (the 2013 Pulitzer Prize-winning DISGRACED). I saw the latter, and once again, Akhtar proves to be a master at writing taut, naturalistic dialogue even as the play’s stakes climb ever higher.

The entirety of THE INVISIBLE HAND takes place in a Pakistani prison cell (brilliantly designed by Ashley Ann Woods) where we meet American Citibank employee Nick (Joel Reitsma), who has been kidnapped. Imam Saleem (Bassam Abdelfattah) hopes that Nick can leverage his financial expertise to make money in order to pay his ransom. With the help of the Imam’s right-hand man Bashir (Owais Ahmed) and the sympathy of Dar (Anand Bhatt), Nick goes to work in the hopes of earning his freedom.

Under Francis’s direction, the company of four handles this play masterfully. The emotional intensity throughout THE INVISIBLE HAND makes the play utterly exciting and discomfiting throughout its run time. All the actors have clear takes on the emotional arcs of their characters. And though THE INVISIBLE HAND already starts off in a tense spot, they take it to an ever more emotionally precarious climax. Reitsma finds an interesting balance between Nick’s fear and uncertainty and his unrelenting work ethic once he is given his money-making mission. As Basir, Ahmed manages to be simultaneously empathetic and unnerving-especially as he develops over the course of the play. Abdelfattah is commanding and powerful as the Imam but also shows us the character’s vulnerabilities that lie beneath the surface. Bhatt lends humor and warmth into this dark and riveting labyrinth of a play.

For Chicago audiences that were taken with Akhtar’s previous works produced here in the city, THE INVISIBLE HAND is a worthy production to add to the mix. Akhtar has written a play here that gives all four characters a level of both empathy and disdain in the audience’s eyes, which is a compelling and necessary choice. Though Nick is a prisoner, Akhtar does not make his captors merciless, nor is Nick completely innocent. THE INVISIBLE HAND resides in that tension found in the grey area-and it does not let go for a moment.