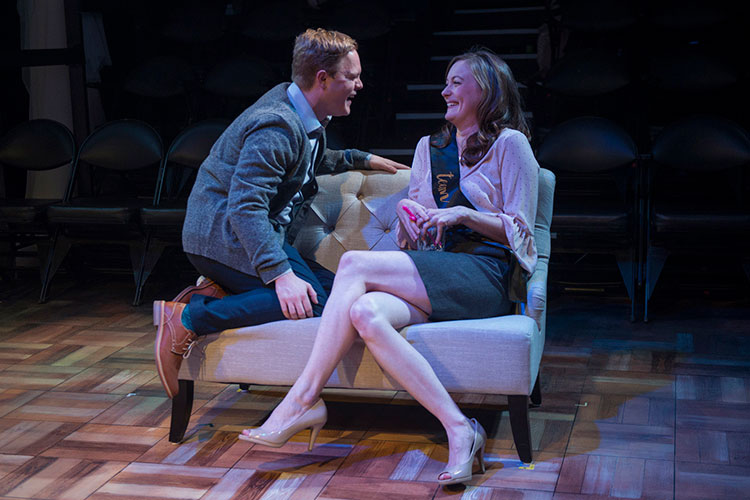 In just over two hours, the Chicago premiere production of Joshua Harmon’s SIGNIFICANT OTHER made me laugh so hard I almost couldn’t breathe and then proceeded to have me very close to tears at the end. Harmon’s alternately hilarious and heartbreaking gem of a play acutely articulates the plight of protagonist Jordan Berman. Jordan is a single Jewish gay man in his late 20s, living in New York City and watching as his three best female friends find love and marriage. On the page, Harmon so beautifully expresses the nuances of shifting friendships and the fear of being left behind by those one holds dear, and he also nails so completely the complex neuroses that come with dating, loneliness, and being lost in one’s own head. Director Keira Fromm and an outstanding local cast bring Harmon’s expertly crafted words to life, finding both maximum amounts of humor and gut-wrenching emotion in the piece.

While it is profoundly important in SIGNIFICANT OTHER that Harmon brings a young gay man’s experience front and center by upending the conventions of traditional American romantic comedies, I think any audience member will be able to relate to Jordan’s overwhelming feelings of loneliness (I certainly did). Through Jordan’s character, Harmon so specifically captures the nuances of those feelings and the tension between wanting to be a supportive friend and yet feeling profoundly alone. This production could hardly ask for a better Jordan than Alex Weisman, who so keenly explores all of his character’s nuances. Weisman plays out all of Jordan’s neuroses and yet manages to make him feel relatable rather than entirely pathetic. He also gives a performance that is undeniably emotional and real. Towards the play’s end, Weisman must deliver a long, tense monologue in which Jordan confronts his best friend Laura (Amanda Drinkall). The emotions Weisman displayed in that monologue were so real and so ratcheted up that I was exhausted just watching-and yet that is exactly what makes his work here so remarkable.

Weisman is surrounded by equally talented performers. As wild child Kiki, Cassidy Slaughter-Mason maximizes the humor in her role while still making the character seem real. Tiffany Oglesby has a lovely and grounded take on Jordan’s cynical friend Vanessa, and I particularly enjoyed an early scene between Oglesby and Weisman at a New York City art museum. Both actors established a delightful rapport between their characters. As Jordan’s office crush Will and other men in the lives of Jordan and his friends, Benjamin Sprunger is able to shift gears quickly and deftly. He is particularly charming as Laura’s boyfriend, Tony. Ninos Baba also essays a variety of role and finds particular humor in the role of Jordan’s officemate Evan. Ann Whitney is a sheer delight as Jordan’s grandmother, who longs to pass down family stories to her grandson. Amanda Drinkall seems perfectly cast as Jordan’s best friend Laura. She plays up her character’s big heart and generosity in SIGNIFICANT OTHER’s early scenes and finds even greater emotional depth in that late tense scene with Weisman.

Jeffrey D. Kmiec’s set easily allows the actors to convene in a myriad of spaces that the script requires, with nice touches of tulle and flowers on either side of the stage that just scream “wedding scene.” Noel Huntzinger’s costume designs are also spectacular, and she has made particularly smart selections for the bridemaids dresses. Christopher Kriz’s pitch perfect sound design and John Kelly’s atmospheric lighting round out the world of SIGNIFICANT OTHER, giving the actors a great space on which to play.

About Face Theatre and Theater Wit’s intimate staging brings out every bit of humor, beauty, and emotion in SIGNIFICANT OTHER. Joshua Harmon’s writing, Fromm’s direction, and the impeccable acting will make your heart burst both with joy and with the relatable pain of loneliness. This production does so much justice to Harmon’s already brilliant play and places the audiences front and center to observe the real friendships and Jordan’s own search for love and acceptance.

SIGNIFICANT OTHER plays at Theatre Wit through December 9. Tickets are $20-$38. Visit aboutfacetheatre.com or theaterwit.org for tickets.