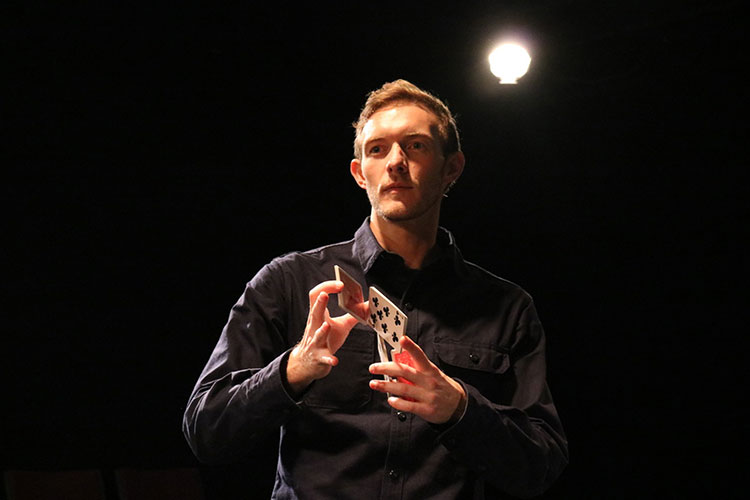 The best way to frame Brett Schneider’s solo show COMMUNION: An Evening of Magic, now playing at The Den Theatre, is with the following scenario: Open the book you’re currently reading to a random page. Pick a word, any word on the page, and lock it into your mind’s eye. Got it? So does Schneider. At least he might if you come to COMMUNION.

Schneider brings his background as an actor and magician to this exhilarating 70-minute solo piece that he also wrote (Elana Boulos directs). From the moment audiences enter The Den’s Upstairs Main Stage, Schneider invites them to engage in the experience of COMMUNION. He passes out small pieces of paper and golf pencils, asking audience members to write down secrets and fun facts on them and deposit them into a glass fishbowl in the center of the stage. While I won’t reveal what Schneider does with these tidbits, this moment encompasses the spirit of the show. Schneider easily gains the audience’s trust by inviting them into the show with him. COMMUNION’s name is apt; the show is a communal experience in which Schneider and those watching him seem to become one.

And that’s exactly what makes COMMUNION such a success. Schneider is the magician and, of course, the author of the piece, but he lets audiences buy into his act of their own accord. There’s nothing slick at all about Schneider’s magician persona; rather, he communicates to the audience with an air of familiarity and earnestness. Schneider wins us over with ease, so we’re willing to trust in the magic he delivers. He begins the show with the simple utterance that “Magic is real,” but he doesn’t force that message on us. Instead, like any good magician, he shows us. And when Schneider shares some of his own stories about how he came to believe in magic, that makes it all the better.

While Schneider is a master at sleight of hand and other dazzling magic tricks, COMMUNION largely employs non-traditional magic. Much of Schneider’s tricks involve various forms of mind reading and audience engagement. To reveal much more would give it away, but Schneider engages the audiences throughout in a way that is so sincere. At the same time, he commands audience attention such that you’ll be on the edge of your seat the whole time. It’s this tension that makes COMMUNION so unique and enjoyable. Schneider makes himself easy to trust, so that we’re all the more surprised and awed when he does something we could barely imagine at first.

Schneider is charming as all get out, and COMMUNION allows him to display his remarkable talents as a magician but also as a genuine and heartfelt performer.

COMMUNION: An Evening of Magic plays The Den Theatre’s Upstairs Main Stage for five more performances only through September 22. Tickets are $30 and $15 for students and industry. Visit TheDenTheatre.com to purchase tickets.