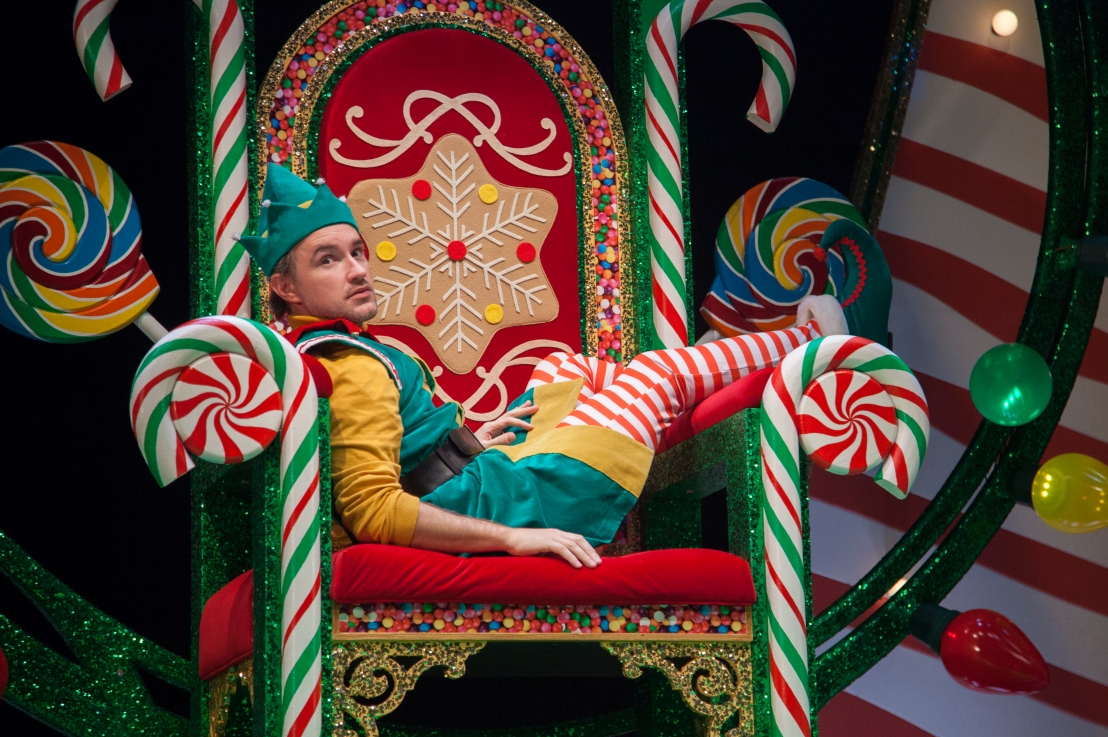 For this one-man dark side of the holidays show, Goodman Theatre could not ask for a better actor than Matt Crowle. He brings all of David Sedaris’s droll humor to life in THE SANTALAND DIARIES (Joe Mantello adapted Sedaris’s original short story into the play). In the role of Crumpet the Elf, the show’s stand-in for Sedaris, Crowle maximizes every ounce of cynicism and crass humor in the material, while also instantly winning audiences over. Crowle’s malleable facial expressions and ever-changing mannerisms allow him to easily slide into each of the characters in the story. Crowle’s improvisational skills also make the material fresh and allow him to mine the play for even more outrageous jokes (THE SANTALAND DIARIES has been around since 1996).

As an example: On the night I saw the show, two audience members entered late and headed straight for the front row. “Nice to see you, ladies,” Crowle quipped as they tried to sneak in under the radar. These kinds of ad-libs make Crowle’s take on THE SANTALAND DIARIES even more hilarious; it is not an exaggeration to say he had me in stiches at many moments throughout the show. It also means that Chicago theater fans who think they already know this material should absolutely consider revisiting it again, especially if they’re in the mood for some off-kilter holiday fare.

Crumpet the Elf’s Macy’s Santaland nightmare comes to life in a stunning set by Kevin Depinet, which is a veritable Christmas explosion. Flanked by giant Christmas trees and presents a large neon “Ho Ho Ho” sign, the centerpiece of the set is, of course, Santa’s chair itself, delightfully decorated in pieces of candy (note especially the cheeky gummy bear details at the top of Santa’s “throne.”) Based on the play, one also has the sense that this Santaland is far more pleasant than the one Crowle describes. Rachel Lambert’s costume designs are equally magnificent, and Crowle’s ridiculous elf costume contrasts all the more with his crude and cynical take on the holiday season. Mike Durst’s lighting design adds to the Santaland sensory overload.

Under Steve Scott’s direction, Crowle never lets the larger-than-life set overwhelm him. Instead he commands every inch of the stage in this laugh-out-loud romp. THE SANTALAND DIARIES is uproariously funny in almost every moment. I’m inclined to mention, however, that some of Sedaris’s crass language feels insensitive and out-of-touch now, even for an elf as cynical as Crumpet. Fortunately, Crowle’s fresh take on the role and his improvisational skills help overcome the more outdated moments in the script.

Though working at Santaland is clearly far from joyful for Crumpet, Crowle makes this show an out-and-out hilarious holiday treat for audiences. I have not laughed so hard or so much at a show in a long time, and Crowle really sells all the unconventional and coarse holiday laughs available to him in THE SANTALAND DIARIES.

THE SANTALAND DIARIES plays through December 30 in Goodman Theatre’s Owen Theatre, 170 North Dearborn. Tickets are $25-$119. Per the Goodman’s press release, this show is “for mature elves only.” GoodmanTheatre.org or 312.443.3800