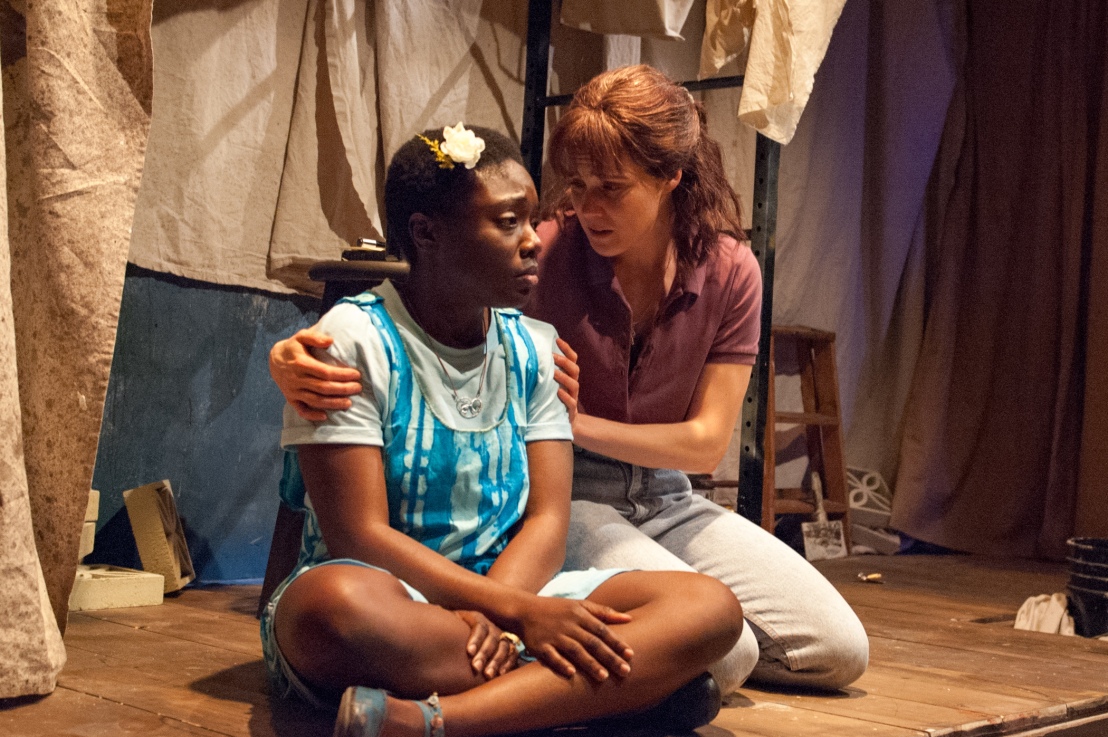 Hansol Jung’s CARDBOARD PIANO, now in its Chicago premiere at Timeline Theatre Company, centers on historical and contemporary issues in Uganda. Jung’s narrative sweeps up much of that nation’s recent history of violence, child soldiers, and homophobia into the story of just a few characters inside a church. And CARDBOARD PIANO relays all this alongside lofty themes of forgiveness, the power of religion, and the human need to fix what’s broken and right wrongs. While this may sound like a tall order for one play to tackle—and it is—it is Jung’s utterly human, multidimensional characters that allow her to find success. Jung also proves a masterful playwright because she knows that the best plays meditate on themes and add more complexity to some of life’s biggest questions, without offering up clear answers.

In covering so much ground, Jung structures CARDBOARD PIANO in two distinct acts. The play initially reads like a pair of one-act plays. CARDBOARD PIANO opens with an earnest love story of American teenager Chris (Kearstyn Keller), the child of Christian missionaries, and Ugandan native Adiel (Adia Alli), who come together on the night of January 1, 2000 for a secret wedding ceremony. Through Chris and Adiel, Jung conveys the optimism and excitement of youthful love. But Chris and Adiel’s night soon takes a shocking turn when the child soldier Pika (Freedom Martin) arrives at the church, having fled from his unnamed commander (Kai Ealy). CARDBOARD PIANO becomes in this moment violent and jarring, with the first act coming to an intense conclusion.

In the second act, Jung introduces a new set of characters still in the same church, fifteen years later. The only character who remains the same is Chris, now a 30-year-old woman. Chris returns to the site of that fateful night in her life many years ago, where she encounters the pastor Paul (Ealy) and his wife Ruth (Alli). These characters’ lives intersect in some surprising ways, which I won’t reveal here, and especially when Paul’s recently out cousin Francis (Martin) arrive on the scene.

TimeLine’s production design uses the same basic set for both acts, but Jeffrey D. Kmiec’s church setting completely transforms between the two. The setting for the first half is that of a decrepit church, made all the more dim by Brandon Wardell’s appropriately unsettling lighting design and David Kelepha Samba’s sound design. This set conveys the world of decay, violence, and homophobia awaiting Chris and Adiel just outside the church doors, down to the leak in the ceiling from which a drop of water consistently falls into the bucket. In the second half, the set is transformed into a space of light and cleanliness, but the darkness of the first act is not soon forgotten. The play also makes lovely use of music and the actors’ vocals, with Frederick Harris as music director.

Under the direction of Michelle Moe, CARDBOARD PIANO is a fine piece of ensemble work. The actors move nimbly between the different roles they play in each act. Because CARDBOARD PIANO addresses so many lofty, uncomfortable issues, this is also a play that asks the cast to really rely on each other to make each moment work, and the trust these ensemble members have built is evident.

Kudos must be given to Keller for the way in which she portrays such an utter transformation in Chris. In the first act, she fully embodies Chris’s youthful optimism and impulsiveness, with her fluttery body movements and fast vocal cadence. Keller takes on a different tenor in the second act, however, showing us just how affected Chris was by the events of many years ago. She conveys how the character has not only become an adult in terms of the time passed, but also because of the events of her life that clearly weigh on her. Alli brings a lightness to both of her roles, but also mines the layers underneath both of her characters as they search for answers. Ealy is all hard edges and gruffness in the first act as the commander, but in the second act, we see a different side of him as the pastor. Martin, currently a senior in high school, proves adept at switching between the two roles he portrays. Overall, this cast capitalizes on every moment of the material and Jung’s richly drawn characters.

One last note: The cardboard piano of the play’s title refers to a critical anecdote Chris shares in the first half. This story becomes a powerful metaphor for the play’s themes of forgiveness and the question of whether what has been broken can truly ever be fixed. This delicate and charming anecdote demonstrates, too, the genius of Jung’s writing: throughout CARDBOARD PIANO, she takes many small, emotionally rich moments and allows audiences to contemplate big themes without feeling as if we’re being taught a lesson. CARDBOARD PIANO is an immensely difficult play to watch and an emotionally draining experience, but particularly in the second half, it’s also a beautiful one, and it ends with a message of extremely cautious optimism.