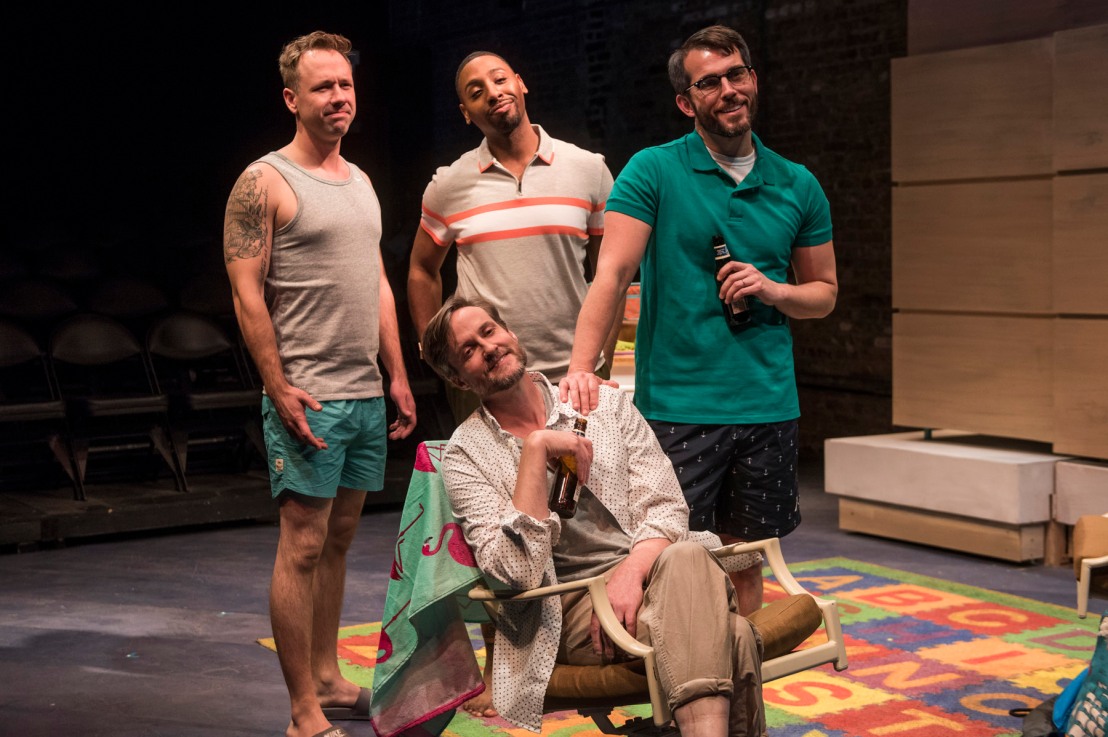 In DADA WOOF PAPA HOT, now in its Chicago premiere at About Face Theatre, playwright Peter Parnell explores that nagging question of what it means to have it all. The play centers on a gay couple and their circle of friends. Though Alan (Bruch Reed) and Rob (Benjamin Sprunger) have been together for fifteen years, they’ve been married for a much shorter period of time and must navigate their shifting identities as partners and as parents of their three-year-old daughter, Nicola. (The play’s seemingly nonsensical title refers to her first words and attempt at her parents’ names.) The characters in DADA WOOF PAPA HOT are clearly well-off, but that doesn’t make the ways in which they struggle with the challenges of daily life and parenthood any less human.

This is a play that asks about what exactly it means to become part of the mainstream. This is best represented by a new friendship between Alan and Rob, who are in their 50s and 40s, respectively, and a younger couple, Jason (Shane Kenyon) and Scott (Jos N. Banks). Both couples are new parents and send their children to fancy NYC schools with equally fancy names: Little Village School and Little Farmhouse. But while Alan remembers feeling like he was on the fringes of society back in the 1980s, it seems that Jason and Scott (and to some extent, Rob) have never had that same experience as members of the LGBTQ+ community. This creates an interesting tension in the play, particularly as each character contends with what exactly it means to be a good spouse (the answers vary wildly).

As Alan and Rob navigate their relationship to one another and to their daughter, they also confide in Alan’s college roommate Michael (Keith Kupferer) and his wife Serena (Lily Mojekwu). Michael also is experiencing an identity crisis of his own: he confesses to Alan early on that he’s having an affair with Julia (Rachel Sullivan), another parent at his kids’ school. This confession sets Alan spinning, causing him to contemplate what he wants out of life, marriage, and fatherhood.

Under the direction of Keira Fromm, all the performances in DADA WOOF PAPA HOT are excellent. Reed conveys Alan’s inner struggle as he navigates the uncertain terrain of his life. Sprunger displays genuine affection for his scene partner and also easily expresses his love for his daughter, even though she’s never seen onstage (Mia Caliento supplies the voice of Nicola). Kenyon has a sprightly energy as Jason, which echoes his character’s free-spiritedness and easygoing nature. As Scott, Banks’s more grounded energy demonstrates why these two balance each other out as a couple. Kupferer displays his usual gruffness and geniality as Michael, while Mojekwu provides many laughs in some of her “helicopter parent” moments. As Julia, Sullivan provides an interesting foil to some of the other characters onstage.

William Boles’s sleek set design grounds the play in the privileged urban world of Manhattan, while also allowing for the intimate space to reflect a myriad of locations. Noël Huntzinger’s costume designs also reflect the contemporary, urbanite nature of the play.

Though the characters in DADA WOOF PAPA HOT are financially secure, Parnell’s script reveals that identity development and self-actualization are challenges that can follow us long into adulthood. The play conveys this well with moments of humor and occasional profundity, and the overall result is lovely and probing.