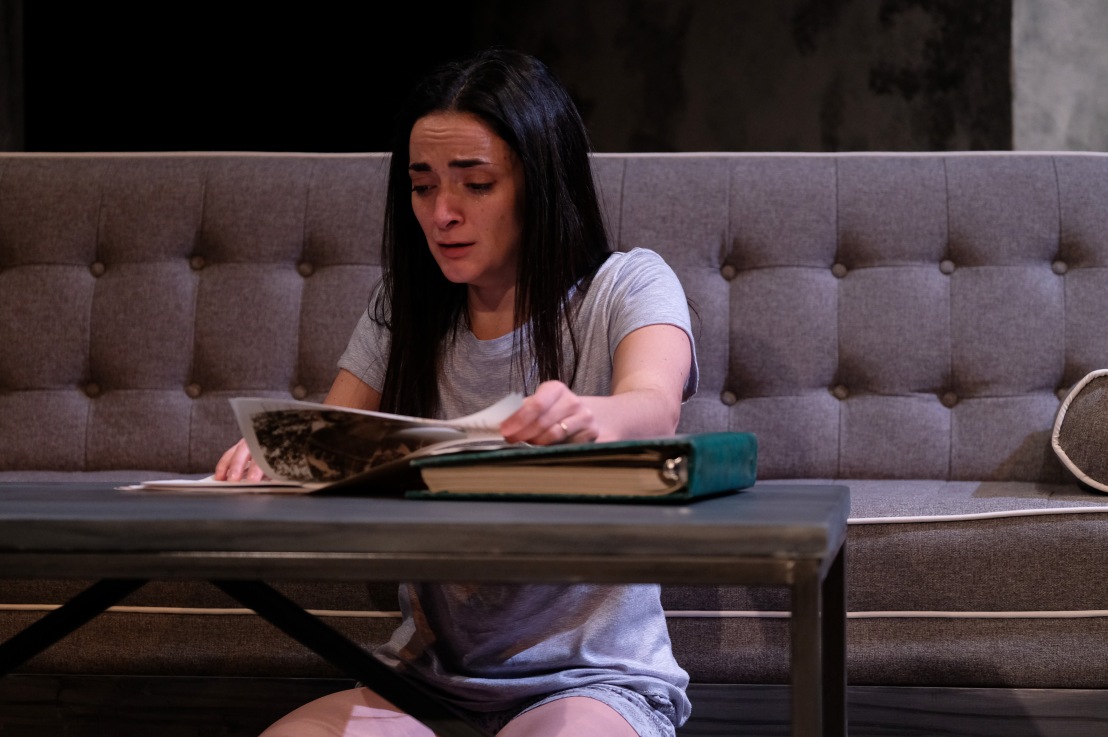 Much like its companion piece THE MADRES, Stephanie Alison Walker’s THE ABUELAS starts out as a slow, compelling burn that builds to a torrent of emotions. While THE MADRES took place in 1979 and introduced us to three generations of Argentine women fighting for the survival of the youngest, Belen, who is among “Los Desparecidos” taken by the government—THE ABUELAS transports us right here to Chicago, 37 years later. José Manuel Diaz’s polished and urbane apartment set, implied to be located on Lake Shore Drive, paves the way for a narrative that starts out as an almost mundane portrait of a modern family. But soon secrets are revealed that connect back to the characters of THE MADRES in a heartbreaking and powerful fashion.

THE ABUELAS centers on Gabriela (Cruz Gonzalez-Cadel), the first  woman to become principal cellist for the Chicago Symphony Orchestra, and the owner of that posh Chicago apartment with her husband, Marty (Nate Santana). The play opens on the night of Soledad’s (Katie Barberi) birthday, Gabriela’s mother who has arrived in the dead of Chicago winter to help look after newborn baby Lucas. When unexpected guests Cesar (Esteban Schemberg) and Carolina (Alba Guerra) arrive at Soledad’s birthday party, Gabriela ultimately discovers a secret that will change the course of her life. (Those who saw THE MADRES will also note the familiarity of the name Carolina—she is indeed the same Carolina from that play). As Gabriela discovers shocking truths about her identity, she is forced to reexamine her relationships with Soledad, Marty, and ultimately, herself.

Walker has constructed a story that slowly builds to an emotional climax. And while I admire Walker’s ability to build tension moment-by-moment, I do think THE ABUELAS felt like it could use a bit of a trim on opening night. Still, Artistic Director Ricardo Gutierrez’s work and that of the ensemble ensures that the emotional integrity of the play remains entirely intact. As Soledad, Barberi portrays the character’s immense privilege and self-centeredness that manages to co-exist alongside her unconditional love for her daughter. Barberi’s emotional performance only deepens as the gap between her and Gabriela grows wider as the play progresses. As Marty, Santana plays the role with utter sweetness and devotion to his wife but also doesn’t shy away from the moments that reveal the more troubled man underneath. Schemberg’s portrayal of Cesar particularly heightens that all-revealing moment at the birthday party, and a scene he shares with Gonzalez-Cadel in the play’s second act is one of the most gut-wrenching of the night. Guerra portrays Carolina as both hardened and exhausted from all she has witnessed in life, but with a spark of hope still shining bright. Seen in flashback, Ilse Zacharias gives a heartbreaking portrayal of Carolina’s daughter Belen, fighting for her survival.

Because Gabriela is so clearly at the center of the piece, however, the evening really belongs in so many ways to Gonzalez-Cadel. Gonzalez-Cadel demonstrates how Gabriela converts her self-assuredness and pride in her work as an extraordinary and talented cellist and newborn mother into a woman who has so clearly lost her way and becomes desperate to find it again. She has such a ferocity as Gabriela but also a vulnerability that cracks her wide open. To watch Gonzalez-Cadel in this role is to see the entire arc of THE ABUELAS play out; she builds the role slowly until she comes blazing to an emotional climax upon which the whole play hinges.

As with THE MADRES, Walker has once again constructed a devastating and empowering portrait of strong women facing unbearably tragic circumstances in THE ABUELAS. And particularly with Gabriela, it is fascinating to see her discover her own truth about her identity and how it is tied up with an incredibly dark moment in Argentinian history.