Rebecca Gilman’s world premiere TWILIGHT BOWL, now playing in the Goodman’s Owen Theatre, introduces us to six women contemplating the challenges of young adulthood in vastly different ways. Five of these young women are residents of the small town of Reynolds, Wisconsin. The titular Twilight Bowl refers to a neighborhood bar and bowling establishment, designed with realistic, painstaking detail by Regina Garcia, where the five Wisconsin women gather. Many of them have also worked at the Twilight Bowl, whether to pass the time in the summer or as a way to make a living. Though the lives of these young women may initially seem quaint to some, the introduction of an outsider from Winnetka, Illinois in the play’s second scene indicates that we all in some ways occupy our own “bubbles.”

TWILIGHT BOWL contends with what sometimes happens when one is thrust out of one bubble and into another. The play opens with a goodbye party and presents for Jaycee (Heather Chrisler) and tangentially also for her younger cousin, Sam (Becca Savoy), who is off to Ohio State University on a bowling scholarship. At the suggestion of the sweet and strictly observant Christian Sharlene (Anne E. Thompson), Jaycee’s friends share anecdotes about her on the eve of her departure. Here, audiences have their first taste of Gilman’s quotidian, down-to-earth dialogue; she clearly finds the cadence and phraseology that feels authentic to young American women in their late teens and early 20s. While Clarice (Hayley Burgess) and Sam want to regale Jaycee with embarrassing stories, Sharlene wants to tell one she thinks reflects Jaycee’s inherent kindness.

The mood turns somber when it’s revealed, however, that Jaycee is off to prison for being an accessory to a crime. In order to help her father deal with his opioid addiction, she acquired some medications on his behalf but did not realize he was then dealing them to high school students.  This scene not only sheds light on the dynamic between these young women but also gives us glimpses into their personalities and how that might soon be mirrored in the paths their lives take over the two years of the play.

Notably, Gilman does not place judgment on any of her characters. Rather, the fact that all the scenes take place as everyday moments at the Twilight Bowl reflect the fact that not all young women receive the same opportunities and that also what they choose to do with the opportunities they have is telling. Though each scene in TWILIGHT BOWL feels like a small vignette, Gilman uses these moments to reflect on this theme.

TWILIGHT BOWL is notable, too, for not only employing an all-female ensemble under the direction of Erica Weiss, but also an all-female creative team. This seems only fitting for a play that explores the opportunities (or lack thereof) for the characters we meet. Izumi Inaba’s costume designs reflecs the small-town nature of Reynolds, while also befitting each character’s personality. Cat Wilson’s lighting punctuates key emotional moments in each scene, and Victoria Deiorio’s clever sound design underscores that this is a play all about young women trying to find their way.

Weiss has assembled an all-star ensemble for TWILIGHT BOWL, who bring their 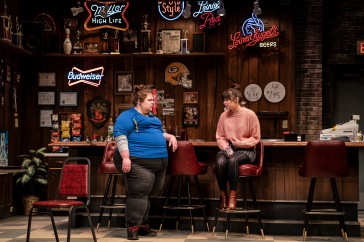 characters to life with real empathy and commitment. While Chrisler plays Jaycee with a jagged edge and a bit of an attitude, she also displays the fear underneath as her character charts entirely unknown territory. Savoy demonstrates Sam’s immense transformation as a result of her college education. In one of the play’s early scenes, Sam returns home from college for Thanksgiving dejected and clearly struggling. But over the course of the play, we see how the opportunity to attend such a large university in such a different sphere from Reynolds affects her. Though Sharlene’s religious devotion might veer towards the stereotypical on paper alone, Thompson finds every ounce of integrity in the role. As Clarice, Burgess conveys her character’s longing to get her life together in a rather different way from Sharlene. A particular moment in which Clarice describes her first apartment is especially moving; Burgess uses this beat as a microcosm of Clarice’s desire to find her own success in the world. Mary Taylor infuses a great deal of wry humor as Brielle, who we learn has quit college and returned to work at the Twilight Bowl. As the play’s only outsider and New Trier high school graduate, Maddy, Angela Morris embraces her role as the fish out of water. Though for Maddy the Twilight Bowl may seem quaint and boring, Morris makes clear the character has many of her own blind spots. Morris has also amusingly perfected the art of upspeak, punctuating each of her lines with a question mark. The tension between Brielle and Angela is particular interesting, and Taylor and Morris are excellent foils for one another.

TWILIGHT BOWL is a thoughtful and delicate examination of what it means for the young women in the play to find their places in the world, and the fact that “making it” in life might look quite different for all of them. The play posits that there is no definitive definition of success and that the best outcome for these young women is to figure out where they fit for themselves.