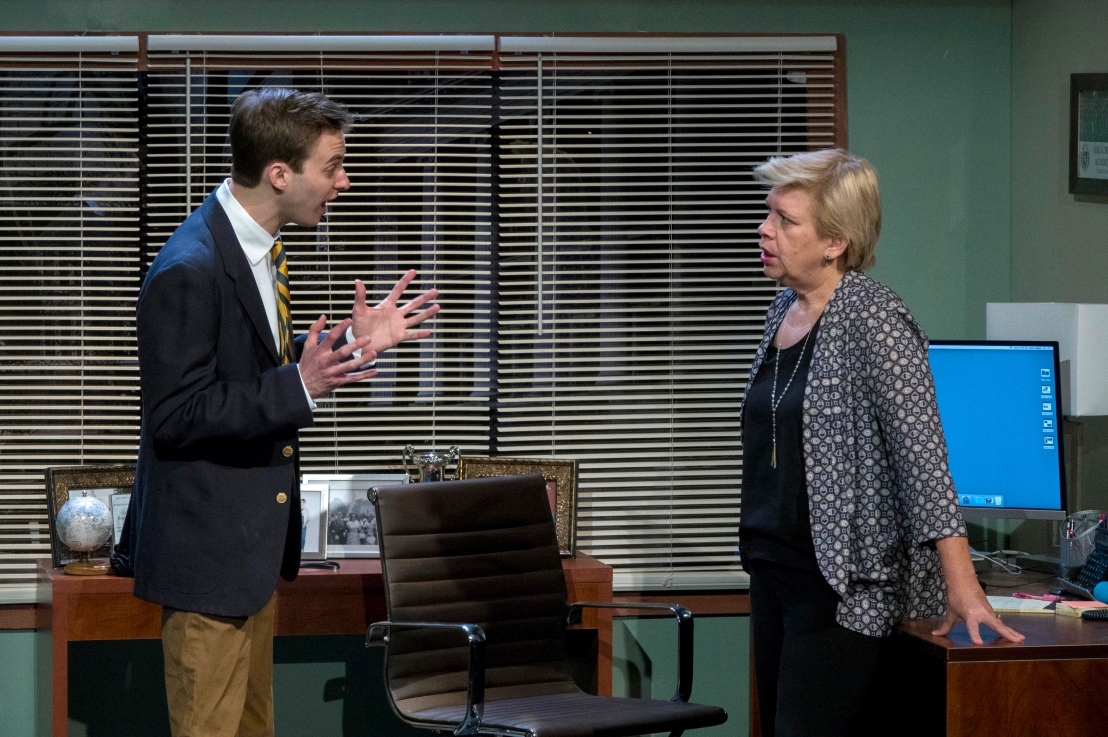 Now in its Chicago debut at Theater Wit under the direction of Artistic Director Jeremy Wechsler, Joshua Harmon’s ADMISSIONS is entirely prescient. The play takes a critical look at both prep school and college admissions, and the lengths to which people will go to have their children admitted. The play also asks keen, complicated questions about white privilege, racism, and how we should now be deciding who gets a seat at the table. ADMISSIONS does not offer up any neat solutions to the questions its poses, but it causes the audience to take a hard and needed look at those questions and at how we might relate to the happenings onstage.

It’s also interesting that a play so focused on the question of race in elite school admissions has only white characters, but that allows Harmon also to be ruthless with his satire and also in his examination of the complicated issues at hand.

ADMISSIONS also explores the notion of diversity, and whether that’s an aim that in some cases can be purely optical. The play is set at the fictional Hillcrest Academy, an elite private boarding school in New Hampshire. At Hillcrest, we meet Sherri (Meghan Gerachis), the director of admissions and her husband, Bill (Stephen Walker), who is the school’s headmaster. While Sherri is in charge of assembling Hillcrest’s next class, the family also anxiously awaits college admission news for their son, Charlie Luther Mason (the middle name is a tribute to Martin Luther King, Jr.). Sherri, is extremely proud of the fact that she has increased the student body’s diversity 300%, from 6% to 18%, during her tenure.

When Charlie receives some disappointing news about his early action college application to Yale University, Sherri and Bill must reckon with their liberal beliefs and desire for increased diversity at Hillcrest—while also navigating what that might mean for their son. Harmon also uses Charlie’s role for some of the play’s most satirical and uncomfortable moments. After receiving the news, Charlie (Kyle Curry) launches into a frenzied and hysterical monologue about his plight. Curry delivers this monologue at breakneck pace, seeming never to pause to take a breath. In the monologue, he delivers line after line questioning how society—and his parents—arrived at their definitions of diversity. It’s simultaneously hilarious and discomfiting, which mirrors the tone of much of Harmon’s work here. Charlie is also lamenting the fact that his best friend, Perry, who is biracial, was admitted to the school that denied him entrance.

ADMISSIONS becomes yet more complex when Charlie’s reaction puts Sherri at odds with her close friend, Ginnie (a lovely turn from India Whiteside), who is Perry’s mother. Harmon uses this dynamic to add more layers to the questions he poses about who deserves admission to elite school—and who has the power to decide who’s deserving, anyway.

Meghan Gerachis puts in masterful, emotional work. She makes us feel for Sherri, even when we might not agree with her point of view. As Bill, Stephen Walker also turns in a fine performance and knows how to ratchet up the intensity when called upon while maintaining authenticity.

Harmon frames the play by a series of scenes in which Sherri and her colleague Roberta (the sincerely funny Judi Schindler) discuss the need for the school’s admissions catalog to reflect the diversity the student body. This becomes a clever and powerful metaphor for the institutional desire to at least appear more diverse, even if the institution itself hasn’t really changed much at all. Does Sherri’s desire to have more students of color represented in the brochure truly represent her values, or is it just another move to improve the optics? Harmon lets audiences ponder this for themselves. This also becomes a useful framing device for thinking about the timely questions posed throughout ADMISSIONS. Given the recent college admissions bribery scandal, ADMISSIONS certainly could not be landing at a better time. Though the play takes place between 2015-2016, the questions Harmon asks could not be more relevant now.