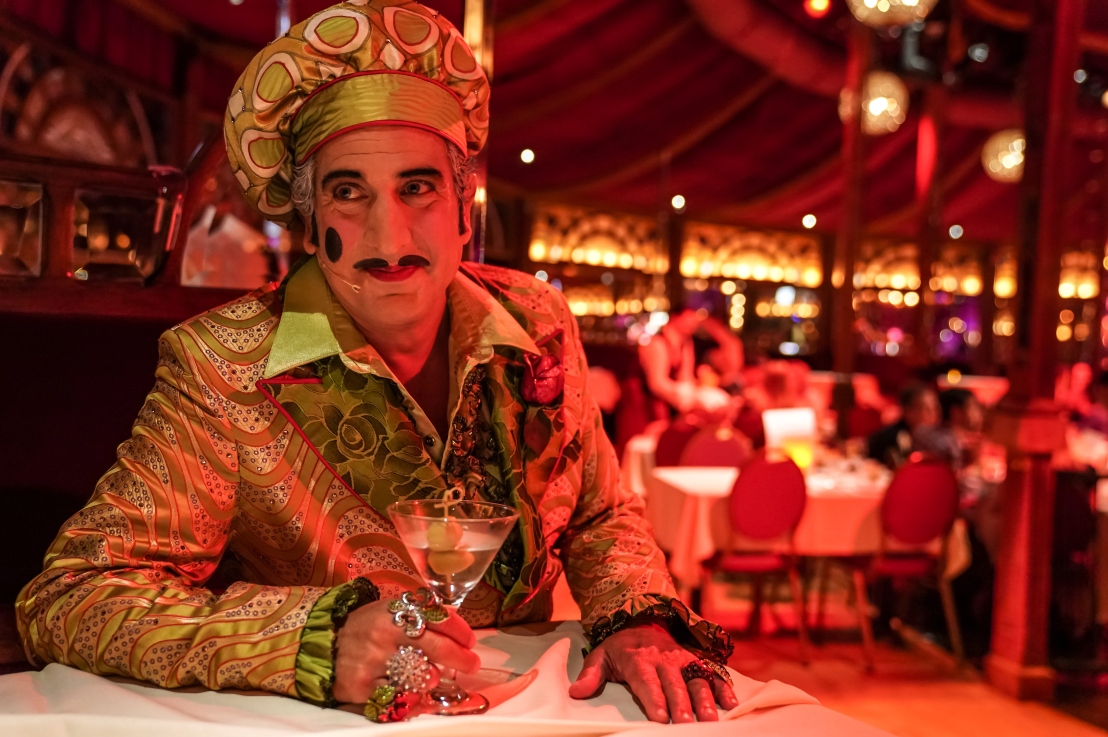 The Seattle-based circus, comedy, and cabaret spectacle Teatro ZinZanni has arrived in Chicago with the hybrid show LOVE, CHAOS AND DINNER. And ZinZanni serves up entertainment with a capital “E” in this production. The evening alternates between decidedly low-brow slapstick comedy scenes, musical numbers, and some stunning aerial and circus acts.

ZinZanni aims to put together an all-inclusive experience with LOVE, CHAOS AND DINNER. The three-hour event includes a four-course meal (Debbie Sharpe of Goddess and the Grocer designed the menu). The servers themselves become part of the spectacle, and the service was excellent. Servers are attentive and manage to deliver the entire meal without interrupting the flow of the show’s action (There are brief breaks during the courses for audiences to converse or check their phones). As to be expected when preparing food in such large quantities, the meal is good but not superlative. Sharpe does offer some interesting dinner options; I was particularly pleased with the vegetarian Thai curry, which was flavorful. I also sampled the salmon dish, which was good but not in any way inventive.

LOVE, CHAOS AND DINNER is altogether enjoyable and not too deep. Watching Chicago-based couple Duo Rose Samuel and Silvia fly through the air in a dazzling, seemingly death-defying trapeze act was utterly breathtaking. Ditto for former World Champion

rhythmic gymnast Elena Gatilova, who performs a magnificent aerial ring act towards the show’s end. Some of the circus acts closer to the ground are similarly fabulous: the Anastasini Brothers have a unique body juggling act that’s unquestionably delightful. The acts that bring together stunning physical feats and big personalities are, to my mind, the main reasons to visit the grand Spiegeltent ZaZou installed in a formerly forgotten space within the Cambria Hotel in the Loop.

ZinZanni’s vocal acts are also dazzling in their own way. Rizo (Amelia Zirin-Brown) serves as the show’s lead vocalist and an emcee of sorts. She can tear into a ballad like 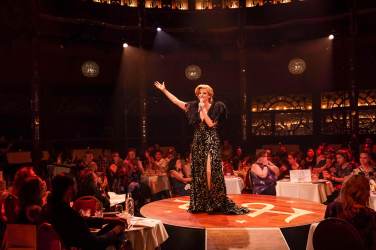 nobody’s business—just hear what she does with Lizzo’s “Cuz I Love You” (which was also an unexpected and superb song choice). She’s also somewhat of a prankster and the proverbial cabaret “diva,” indulging in some bits that are decidedly NSFW (though, aside from that, ZinZanni is family-friendly entertainment). Chicago performer Kelly Britt also brings her operatic talents to the stage, performing a killer rendition of the complex “Glitter and Be Gay” from Leonard Bernstein’s CANDIDE.

The majority of the evening at ZinZanni, however, is filled with more slapstick-y, conversational comedy bits. Frank Ferrante serves as the emcee in the role of Caesar. Ferrante is unquestionably charming and leans into his role as the all-powerful Caesar. He also relies on frequent audience interaction to sell his character and flex his well-honed improvisational muscles.

I was less excited by the comedic duo Mr. P.P. (Tim Tyler) and Cirque du Soleil veteran Joe De Paul, who take up quite a bit of the show’s runtime. While Tyler and De Paul are clearly expert comedians, their lengthy slapstick scenes wore out their welcome. I think a solid 30 or so minutes could easily be trimmed from their material. Still, if you’re a big fan of Abbott and Costello-style comedy, you’ll no doubt enjoy what Tyler and De Paul have to offer.

All told, Teatro ZinZanni offers an escapist evening of pure entertainment with LOVE, CHAOS AND DINNER that will appeal to audiences that enjoy this type of circus and comedy variety show. ZinZanni also plans to stay in Chicago for quite some time; a new show concept beginning in October has already been announced. It will be interesting to see how the spectacle evolves.

Tickets for TEATRO ZINZANNI: LOVE, CHAOS AND DINNER are now on sale through September 29 and range in price from $99-$189. Visit ZinZanni.com/Chicago.