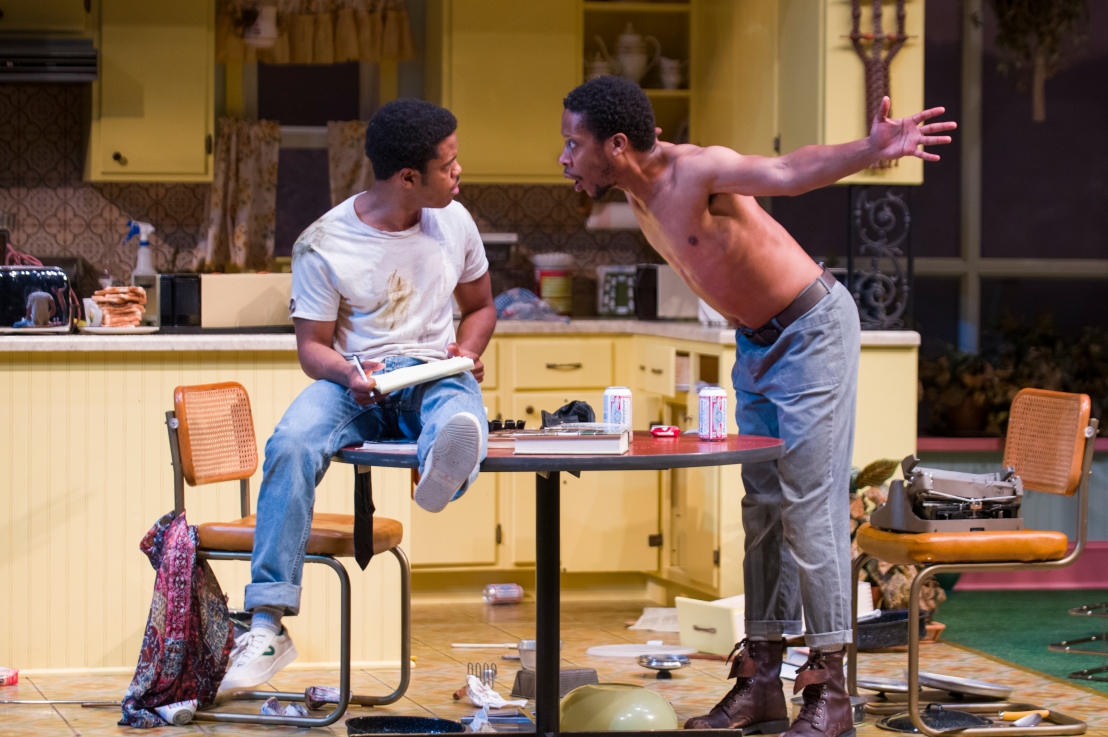 The newly opened production of TRUE WEST is a quintessentially Steppenwolf show in the best way possible: it’s a fresh staging of a gritty American drama with a first-rate cast and production values.

Todd Rosenthal’s magnificently detailed set shows us a somewhat run-down house in the suburbs of Los Angeles. Notably, the house is surrounded by desert, which is a reminder of the fine line between civilization and chaos that the play explores. Richard Woodbury’s sound design is immensely clever, managing to deliver both a sly wink with its Western-film inspired sounds while also truthfully underscoring the play’s many heightened moments. 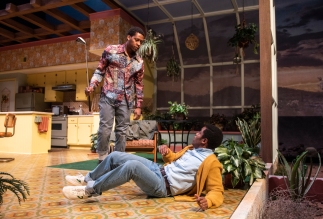 Austin and Lee, respectively, give this 1982 play a sense of renewed urgency. At the play’s start, Austin and Lee unite at their mother’s home after years apart. They initially appear as total opposites: Austin is a successful screenwriter and a family man (though his wife and children are currently 500 miles away from him). Lee has just emerged from months spent in the desert, ostensibly committing some kind of unidentified petty crimes to keep himself afloat. Yet the brothers seem to long for what the other has: Austin longs for the freedom of Lee’s life, while Lee desires Austin’s sense of direction.

TRUE WEST has traditionally been cast with two white actors as Austin and Lee. Having 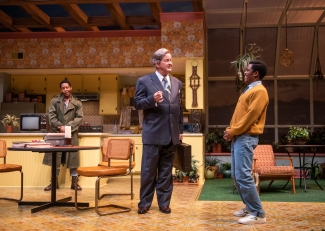 Hill and Smallwood, who are both black, in these roles adds to the uneasy power dynamic between Austin, Lee, and bigwig Saul (a reliably genial Francis Guinan). The negotiations over Austin and Lee’s pending Hollywood projects seems to take on even more weighted meaning with this particular cast. TRUE WEST in part explores the question of who holds the power in modern civilized American society and seems to imply that it often seems easier to abandon such societal structures to go live in the desert (as Lee has quite literally done, and as Austin so hopes to do).

The biggest power struggle of all in TRUE WEST, however, remains the battle royale between Austin and Lee. Hill and Smallwood take no prisoners as they duke it out onstage. It is clear that these performers have built up an immense level of mutual trust, which allows them to really go at each other in a jarring manner. Shepard’s play demands that level of intensity, and there’s no question that Hill and Smallwood deliver. As the brothers’ conflict escalates, particularly in the second act, their interactions become more and more physical. This brotherly battle ends in a stunningly violent and unnerving manner, and Ned Mochel’s fight choreography makes it appear all too real. The rawness and the sheer physicality of these final moments underscores that TRUE WEST remains a relevant piece in its exploration of sibling bonds and of the fine line between the rules of civilization and the more primal, evolutionary instincts within us all.

This production brilliantly explores that line without ever pandering or compromising Austin and Lee’s integrity. Although the brothers act in a way that is far from moral, Hill and Smallwood indicate that their characters are unafraid to defend their convictions. And in having the brothers spiral out more and more as the play progresses, Shepard also demonstrates that these two siblings who initially appear so different have far more in common than it may have first appeared.

Hill and Smallwood personify that unbreakable sibling bond in their performances. We 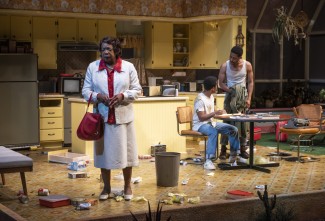 gain yet further insight into their unique and uneasy sibling dynamic when their detached Mom (Jacqueline Williams) comes home from her solo vacation. Though Austin and Lee make clear that their father has been absent from their lives, Williams’ appearance demonstrates how she may be just as absent of a parental figure even if she is physically present. Williams demonstrates her character’s inability to process the destructive relationship she sees between her sons, and she adds another layer to the performance that makes us question how much she really cares—if at all.

Though this staging of TRUE WEST is necessarily dark and shockingly violent, the play’s quirky sense of humor and intriguing themes are fully present in this production. If you have never seen a production at Steppenwolf before, TRUE WEST is the one to see. Hill and Smallwood are also giving such raw, fantastic performances that it would be a shame not to see them. This production epitomizes the best of what Steppenwolf has to offer. It is a testament to all the artists involved that I left the theater feeling the full weight of the violence and darkness inherent in the script, while also feeling invigorated by the immensity and immediacy of the production.