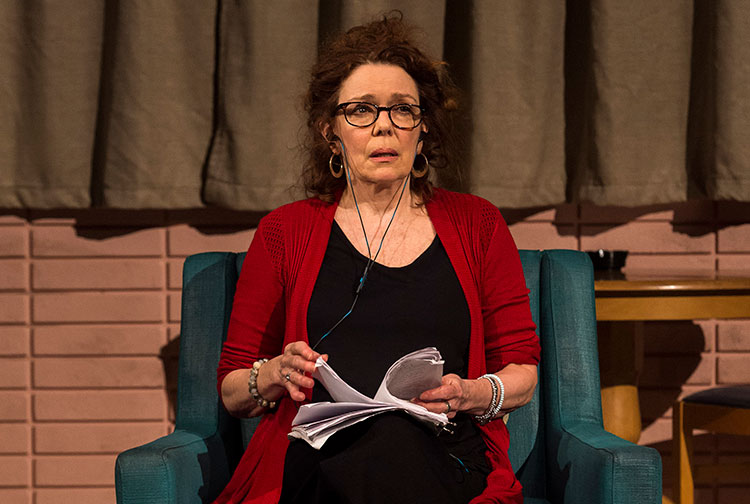 The phrase “stranger than fiction” has never seemed more apropos than when it comes to the incredibly real, fascinating, and horrifying story in DANA H., Lucas Hnath’s play now making its Chicago debut at Goodman Theatre. The play, adapted from a series of interviews between Hnath’s mother Dana Higginbotham and theater artist Steve Cosson, allows Dana to tell her wild story in her own words. It is rare to come across a theatrical experience that is genuinely one-of-a-kind, but DANA H. lives up to that description.

In 1997, Dana was working as a chaplain in a psychiatric hospital. She was ultimately kidnapped by a suicidal former patient and ex-convict named Jim, a violent member of the Aryan Brotherhood. For five months, Dana suffered abuse in many forms and bore witness to many violent crimes that Jim continued to commit. Dana’s story is terrifying and devastating, to say the least.

Hnath uses a unique theatrical device to ensure that Dana has the ability to tell this story of her own accord. The dialogue in the play itself consists of recordings from the series of interviews between Dana and Cosson. Deidre O’Connell, who plays the role of Dana, lip syncs all of her lines to the recordings of Dana’s actual voice. That makes O’Connell’s stellar performance no less compelling or challenging; she relays each line perfectly in sync with Dana’s telling. And in O’Connell’s eyes, we see every bit of the horrors that she’s recounting. Under the direction of Les Waters, this is a stunning way to reveal the play’s events.While the play consists almost entirely of these interview recordings, DANA H. never has a dull moment. It is 75 wholly riveting minutes of theater.

The design mimics the eeriness of Dana’s story. Andrew Boyce’s set design situates Dana in a dank motel room, symbolizing one of the many rooms in which Jim held her hostage over the course of her kidnapping. Mikhail Fiksel’s sound design similarly adds to the production’s chilling effects.

Above all, what matters most here is the unfolding of Dana’s story in her telling. Of course, the picture is incomplete, but rightly so. Dana admits that she has often tried to block incidents from her memory, so much so that she says she’s not quite sure if parts of the experience were even real. Hnath emphasizes the liminality of Dana’s experience by finding poetic, devastating parallels in her work as a chaplain. Dana explains that her work as a chaplain calls upon her to help individuals pass over from this world to the next, just as Dana herself tried (and, indeed, still appears to be trying) to find her way back into the world after the trauma she faced.

DANA H.—while not an optimistic show in any way (nor, really, should it be)—is a haunting portrait of a survivor. O’Connell practically shakes as she lip syncs to Dana’s recountings of the multiple incidents in which she and Jim came face-to-face with the cops. Oftentimes, the cops would greet Jim like an old friend, or refuse to believe that Dana was being held hostage. Other times, they would tell Dana they could only lock Jim away for a day or two—not long enough for her to escape. Of course, in choosing to include these details, Hnath demonstrates how Dana’s personal experience is representative of the ways in which female survivors are often ignored or shoved aside; by allowing us to hear Dana’s own voice in the play, Hnath puts Dana’s telling entirely into her own hands.

DANA H. is nothing short of powerful and remarkable. It’s a play about survival under the most dire and horrifying of circumstances, presented on the stage using a unique concept that mirrors the singularity of Dana’s story.