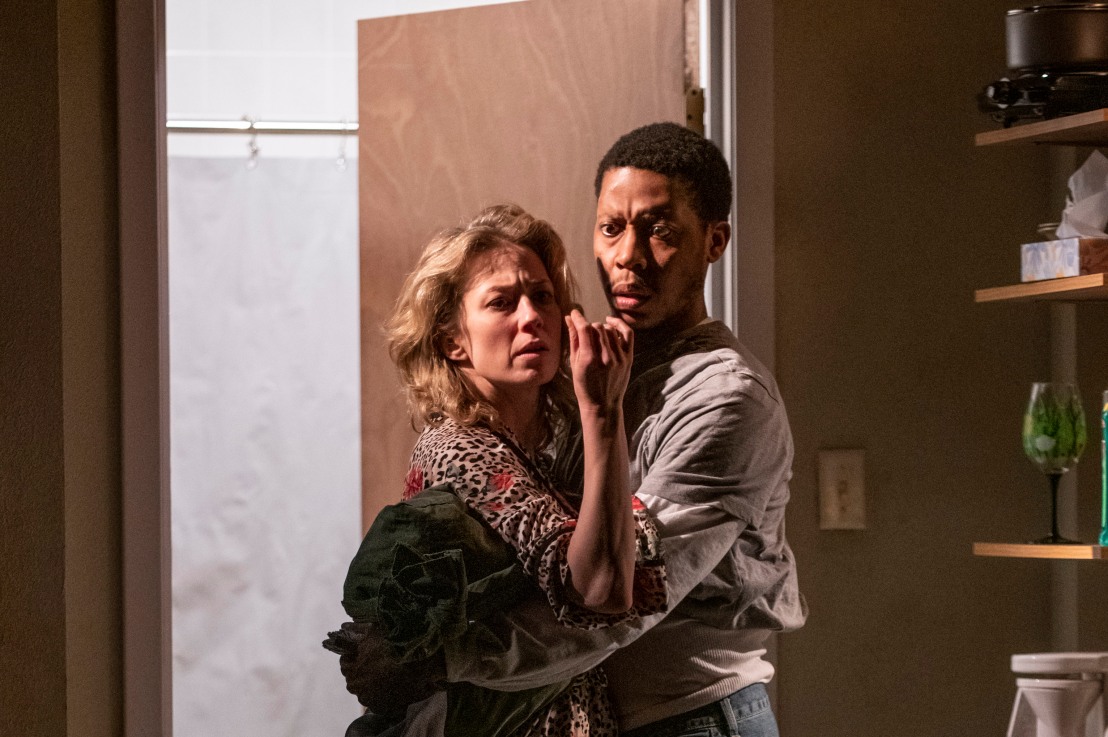 Steppenwolf’s production of ensemble member Tracy Letts’s BUG is positively skin crawling, with magnificent central performances from Carrie Coon and Namir Smallwood that make the play all the more unnerving. While Letts’s 1996 play may have seemed far-fetched and ahead of its time when it debuted in the nascent days of the internet, it reads eerily prescient now. BUG’s dual exploration of paranoid schizophrenia and government surveillance becomes even more unsettling in the current digital era.

The fact that BUG concerns the possible surveillance of two central characters that would be considered on the fringes of society becomes more complicated by the current moment. Now, with the presence of Alexa, Siri, and other smart devices in our homes, we are openly sharing personal data on a daily basis. But BUG complicates the question of precisely how that knowledge might be used—and in the case of Smallwood’s character Peter, the answer would be that it’s certainly not used for good.

The play opens with Agnes White (Coon) in the decrepit motel room where she resides. From the outset, Coon conveys Agnes’s profound loneliness and discontentment, especially as she tries to escape the clutches of her abusive ex-husband Jerry Goss (played with shudder-inducing creepiness by Steve Key) and potentially find some semblance of comfort in her friendship with R.C. (Jennifer Engstrom, who infuses some much needed humor into this dark material). When R.C.’s acquaintance Peter Evans (Smallwood) comes to stay with Agnes at the motel, she finds an unexpected opportunity for the human connection she so desperately craves. Agnes’s desperate longing for both physical and emotional connection, though, allows her to become especially vulnerable to Peter’s point of view. When Peter starts to see bugs crawling and buzzing around the motel room, Agnes, too, becomes convinced. From there, the play spirals out further as Peter becomes more and more convinced that he’s the victim of government experimentation and that those bugs are out to get him.

The question of whether said bugs are real is one of the play’s largest grey areas (and intentionally so)—particularly when Dr. Sweet (a grounded Randall Arney) comes calling on Agnes with a different take on the situation. That said, all the happenings in BUG are more than enough to make the skin itch.

Under the direction of David Cromer, Coon and Smallwood give remarkable and ferocious performances that take the already buzzing and dark energy inherent in BUG to a whole new level. Coon’s desperation builds as the play progresses, and she makes Agnes’s willingness to buy into Peter’s delusions entirely real. While Coon plays Agnes with so much emotional veracity from the start, she’s also a master at letting the performance naturally become bigger as the play moves on—until she caps it off in a blaze of emotion with her stunning final monologue. Smallwood conveys Peter’s immense paranoia with increasing viciousness and showcases that the character can be a master storyteller, such that Agnes and the audience can’t quite be sure what’s true or what’s not. Together, Coon and Smallwood sustain a charged, ominous energy throughout the play, and it pays off explosively at the end.

The production design adds to BUG’s eeriness and the sense that the characters are being watched at every turn. Takeshi Kata’s scenic design includes a motel room filled with dilapidated details and even a running sink. The set is flanked by large panels covered in plastic, which gives a sense that a surprise is hiding somewhere—and, indeed, Kata’s design includes a breathtaking scenic transformation I won’t disclose here. Heather Gilbert’s lighting design punctuates the unease of every moment, and Josh Schmidt’s sound design precisely mirrors the paranoia that pervades the play—with plenty of uncomfortable insect sounds included. Sarah Laux’s costumes convey the characters’ states of disarray, though I must add that Coon and Smallwood spend a great deal of the run-time without many clothes on at all.

BUG’s reflection on the power of paranoia, surveillance, and conspiracy theories plays out with a fiery urgency at Steppenwolf, particularly as communicated through Coon and Smallwood’s outstanding performances. This is a terrifying and prescient night at the theater that left me buzzing.