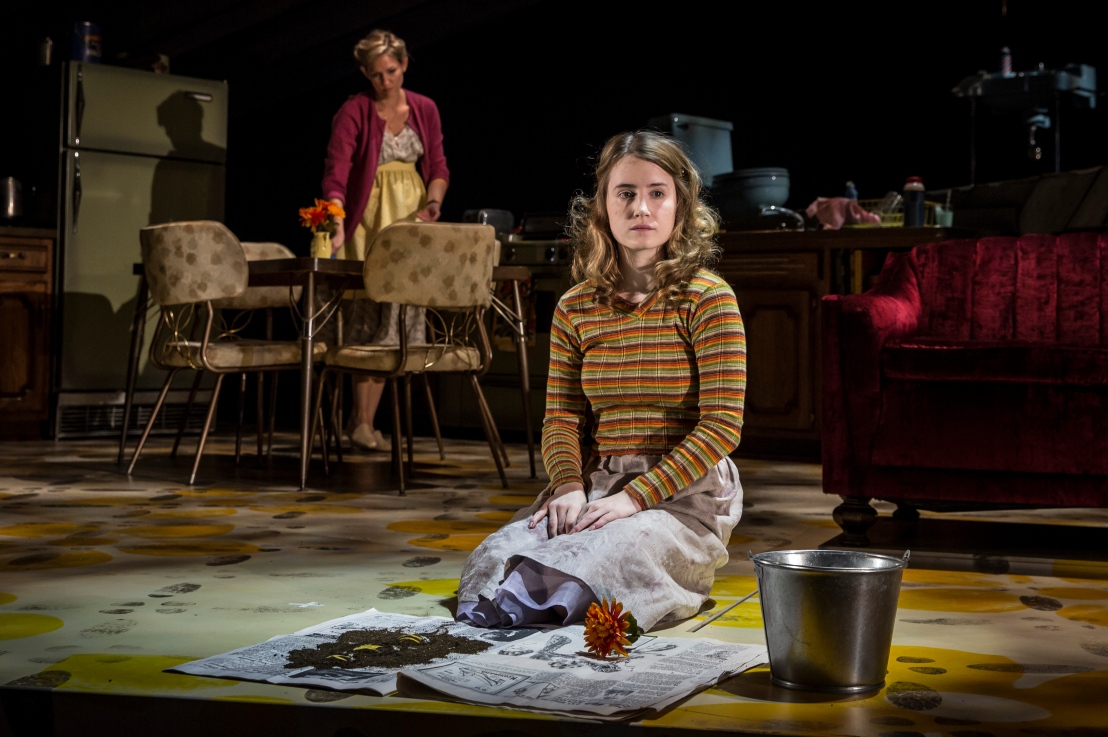 It seems most fitting that Goodman Theatre’s current encore streaming production of SMOKEFALL exists both in and out of time. Noah Haidle’s whimsical play, beloved by critics and audiences when it originally premiered at the Goodman in 2013 (and remounted in 2014), occupies an achronological space. While the play ostensibly lives in an undefined present in Grand Rapids, Michigan, it also pulls us into the past and propels us into the future. Thematically SMOKEFALL is a meditation on life —and how humanity may find purpose within it — told through the lens of various experimental storytelling methods.

With direction by Anne Kaufmann, Haidle’s play takes us through a series of vignettes that vary in presentational style and chronology in the life of one family. At the play’s beginning, we are introduced to the character of Footnote (a charming Guy Massey), who frames the play for us. Footnote, in turn, introduces us to Violet (Katherine Keberlein), who is pregnant with twin sons. We also meet Beauty (the ethereal and rightly delicate Catherine Combs), Violet’s daughter, who consumes an usual diet of earth, bark, and other unexpected items. They reside with Violet’s depressed husband Daniel (Eric Slater), full of ennui for reasons not entirely defined, and Violet’s elderly father, the Colonel (the formidable Mike Nussbaum), who appears to suffer from dementia. Rounding out the cast is Anne Fogarty as the Voice of Lenore, the Colonel’s late wife.

As Violet awaits the birth of her sons, Footnote expounds on the family dynamic. And while the actors give lovely individual performances, it is Footnote’s exposition that gives the characters (at least in the script) their real sense of personality and motivation. Without Footnote’s literal footnotes, the characters are more broadly painted— though Beauty’s eccentric diet and three-year vow of silence make her an initially compelling figure. Massey’s performance as Footnote is crisp and well-timed, but the character does deliver outright exposition — a stylistic choice that feels sometimes like it’s telling the audience too much rather than showing us.

In the play’s subsequent scene, Haidle switches gears to an entirely different – and delightful – form of storytelling. We meet Violet’s unborn fetuses, dubbed Fetus One (Slater) and Fetus Two (Massey). This scene is the greatest creative feats in all of SMOKEFALL. Fetus One and Fetus Two engage in a rapid-fire Vaudevillian style rapport as they expound on topics ranging from Sondheim’s “Send in the Clowns” to the nature of original sin. The idiosyncratic nature of Fetus One and Fetus Two’s Abbott and Costello style banter with the lofty nature of their existential conversation is nothing short of inventive and impactful. It helps too that Slater and Massey don’t miss a single beat as they fire off this dialogue and relish each blunt swear word and keen existential insight.

In that scene, Haidle’s use of SMOKEFALL as a meditation on the meaning of life crystallizes. In a sense, Fetus One and Fetus Two exist simultaneously in the past, present, and future. They live in the past — as they’ve already been conceived. They live in the present — as they appear before us onstage. And they live in the future — they’re still safely inside Violet’s womb, yet to experience life on earth. Haidle’s simultaneous use of humor and this powerful image of a moment not quite in time is impactful. Whether they like it or not, Fetus One and Fetus Two are about to embark on the journey of life — and they must inherit the burden of those who came before them.

While I won’t reveal too much about SMOKEFALL’S second act, it jumps forward several years and shows us an aged Johnny, one of Violet’s twins, and his son Samuel. In a remarkable turn of events, Beauty also returns. The play also flashes back to Violet. And with Violet’s trajectory in SMOKEFALL’s second act, Keberlein lends so much vulnerability and loveliness to Violet’s reckoning in those moments.

All told, Haidle seems to use SMOKEFALL to pose the question, “What is the meaning of life?” Of course, the play cannot answer that question. No one can. But SMOKEFALL also posits that we must look inside ourselves and define our own purpose to make peace with our place in the world. The play’s varied and unique use of a myriad of storytelling styles means that certain scenes and motifs land more than others — but it leaves us with a powerful central theme to ponder.