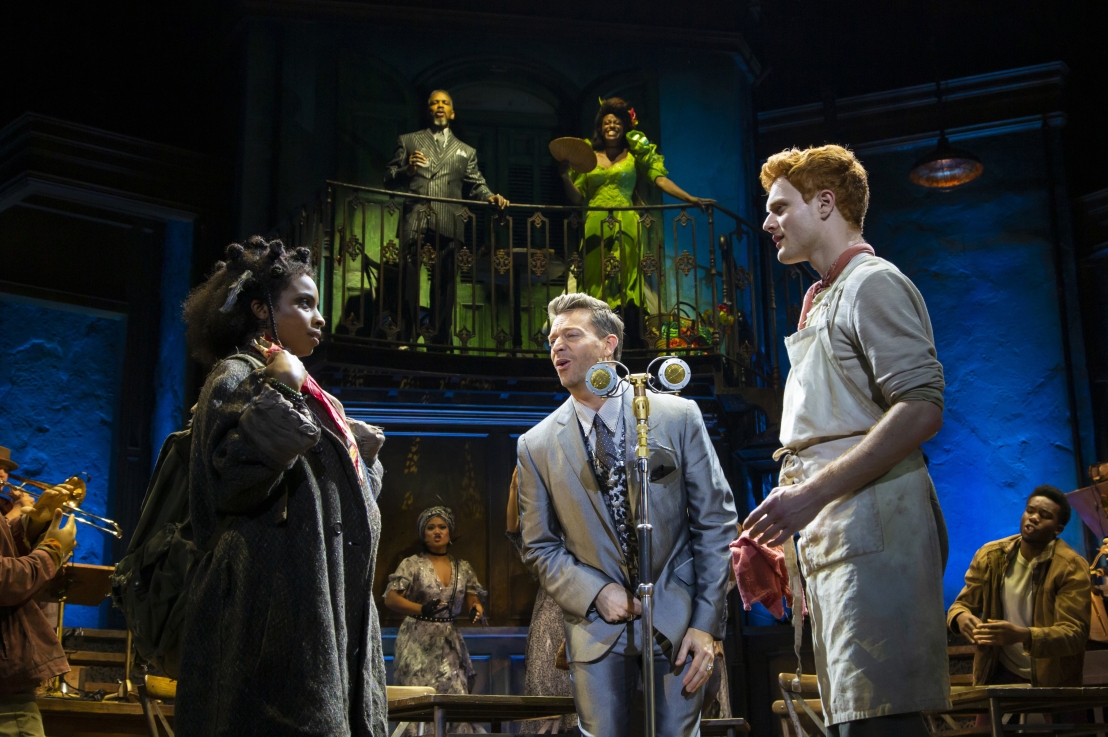 HADESTOWN takes audiences on a wild and original ride into Hades’s underworld. With music, lyrics, and book by Anaïs Mitchell, HADESTOWN combines the Greek myths of the ill-fated lovers Orpheus and Eurydice, along with that of Hades and Persephone, lord of the underworld and his beloved wife who spends half of each year on earth and half underground — thus causing the seasons. Mitchell’s score and lyrics likewise draw on a variety of musical influences, incorporating New Orleans style jazz, folk, and pop Broadway sounds. The more jazz influenced numbers form the heart of HADESTOWN; they’re the most distinctive, inventive, and lively.

Mitchell also introduces another key figure from Greek mythology as the emcee of the show: Hermes, that winged and mischievous god. Hermes, charmingly and compellingly played here by Levi Kreis, kicks off the show with the rousing “Road to Hell.”  I also must give massive kudos to Audrey Ochoa on the trombone — she’s a hell of a performer, and that brass slaps hard at the beginning of the show (likewise, the whole band is terrific).  It’s a dynamic and forceful opening that builds intrigue to kick off the musical.

Persephone likewise has numbers that are highly influenced by jazz and some of the most powerful in the show. Her first act solo “Livin’ It Up on Top” is raucous and joyful, as Persephone recounts the many wonders of life above ground. It also helps that Kimberly Marable is exquisite in the role with powerhouse vocals that match the character’s high energy. Kevyn Morrow is wry as Hades, and he has a booming bass. Together, Marable and Morrow complement each other beautifully with the contrast between her sharp alto vocals and his deeply resonant bass.

As a complement to Hermes’s role as narrator, Mitchell wisely includes three Fates. Played by Belén Moyano, Bex Odorisio, and Shea Renne, these three women are some of the most commanding figures on the stage. Their harmonies are spine-tingling and exactly right, particularly when they taunt Eurydice with “When The Chips Are Down” as she contemplates the possibility of joining Hades down below.

Director Rachel Chavkin has conceived a production that’s not rooted in traditional conception of Greek mythology, though it does have an ethereal quality to it. Rachel Hauck’s set design provides a literal contrast between the stage’s stairs above ground and a space that unfolds below to reveal the underworld. The set is relatively sparsely populated. David Neumann choreographs, though HADESTOWN focuses more on movement than dance, so to speak. That said, the ensemble who play the Workers in the show (Lindsey Hailes, Chibueze Ihuoma, Will Mann, Sydney Parra, and Jamari Johnson Williams) create striking tableaus through movement. The ensemble harmonies are also a delight to hear.

Though the myth of Orpheus and Eurydice is core to HADESTOWN, these characters are the most uninteresting elements of the musical. Mitchell draws most heavily on familiar pop Broadway sounds for Orpehus and Eurydice’s numbers. Thus, the songs feel the least distinctive out of all those in the score. Mitchell nicely sets up the contrast between Orpheus and Eurydice: He’s optimistic and deeply focused on creating his art, while she’s pragmatic and just wants to obtain what she needs to survive. But dramaturgically speaking, Mitchell’s book and lyrics don’t necessarily fully demonstrate how these opposites attract.

Some of Orpheus and Eurydice’s songs are likewise uninspiring. Orpheus’s “Epics” are meant to establish him as a magnetic and magical musician, but I think every single one causes the show to lose momentum. These numbers are vocal Olympics for Nicholas Barasch, who has honed his falsetto for the role, but I wasn’t drawn to them. In fact, Orpheus’s vocal lines across the board require an actor who has immense command over his head voice. Barasch meets that challenge, but I actually enjoyed it more when he had the chance to sing in his lower register — as in the ebullient act one showpiece “Wait For Me.”

While Barasch and Morgan Siobhan Green are capable actors and lovely singers as Orpheus and Eurydice, respectively, they lack chemistry. Individually, Barasch and Green give nice performances, and their vocal harmonies are on point. But the production doesn’t make us feel their connection; again, I think some of that stems from the material itself, but their performances seem to exist on different planes.

The first act of HADESTOWN offers much to enjoy as it sets the stage for the myths of its two central couples and includes the most sparkling, upbeat, and unique numbers. Unfortunately, the second act loses a great deal of steam. For this act in particular, I think nearly all of Orpehus and Eurydice’s songs could be cut and the show would not suffer for material — though the reprise of “Wait For Me” is certainly welcome and becomes a dazzling showcase for the whole ensemble. It’s most evident in the second act that HADESTOWN started out as a concept album; much of the material feels like padding to turn the show into a full-length Broadway musical. And while much of the act plods along, the pivotal moment of Orpheus and Eurydice’s dark and dangerous walk back to Earth, after Hades provides the condition that they must walk single-file and Orpheus must not look back at his love, then is rushed. Barasch and Green walk in circles, one behind the other, until the rapid-fire moment when he takes that fateful look back. For a dramatic climax, the material and staging feel rather anticlimactic.

That said, it’s a treat to see new musicals that feel truly original and don’t sound like cookie-cutter Broadway. And HADESTOWN delivers on that for many numbers. When HADESTOWN draws the most on its jazz and folk influences — and when Persephone, Hades, Hermes, or the Fates take center stage — the show resonates.