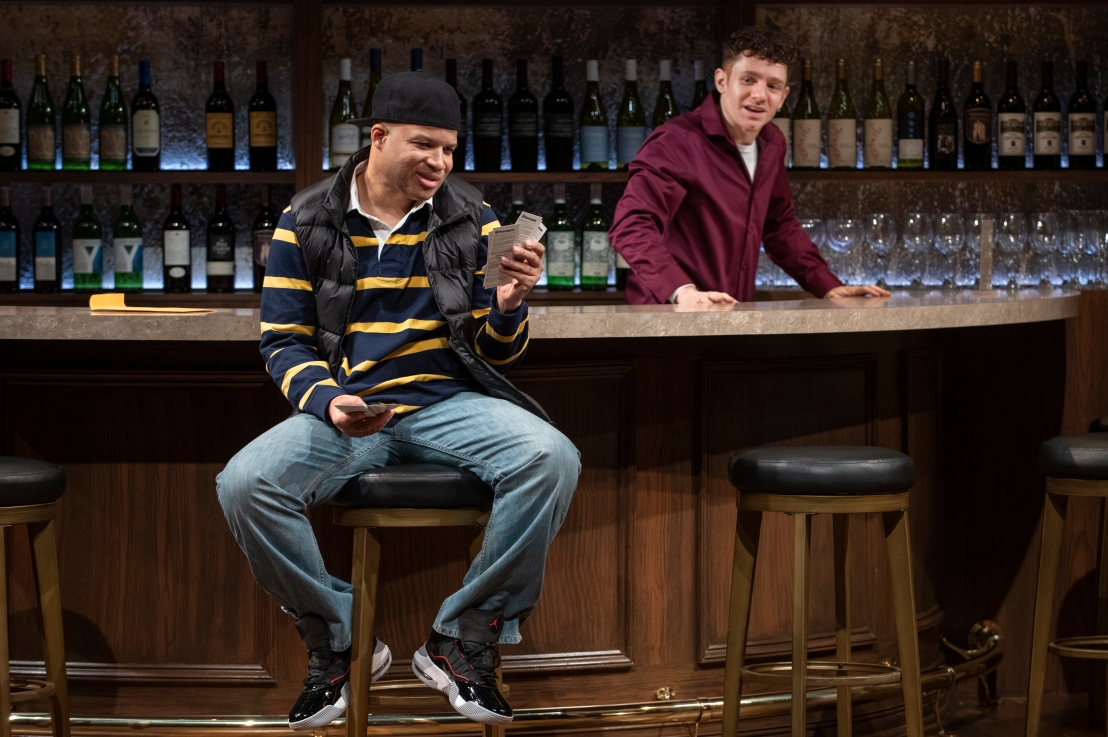 KING JAMES is a platonic male love story — and Rajiv Joseph’s world premiere play at Steppenwolf is one slam dunk of a bromance.

In this warm-hearted and naturalistic play, Joseph explores the friendship between Shawn (Steppenwolf Co-Artistic Director Glenn Davis) and Matt (Chris Perfetti), who bond over their mutual love of the Cleveland Cavaliers and the titular LeBron James.

Joseph accomplishes one of the most difficult feats in a two-hander: He creates real stakes for characters who start out as strangers. When we first meet Shawn and Matt at La Cave du Vin, the wine bar where Matt works, the two have likewise never met. Matt has a pair of coveted Cavs season tickets — and Shawn is eager to buy. But when the two men end up attending the season of games together, they forge an undeniable bond. Joseph’s script beautifully captures the nuances of adult friendship — and though Shawn and Matt form a deep bond, the play also demonstrates that friendship requires effort to sustain. Each of the play’s four scenes coincides with major moments in LeBron James’s career, just as Shawn and Matt move through different seasons in their lives. It’s a simple yet elegant device for the storytelling, and it’s part of the reason why it’s possible for the characters to start as strangers and yet make audiences invested from the jump. And of course it makes for a delicious scene set in 2010 that takes place in the wake of James’s infamous decision to leave the Cavs for the Miami Heat. Needless to say, Shawn and Matt don’t agree on that one.

Just as Shawn and Matt ultimately form rituals in their friendship, they also both engage in the ritual of watching basketball. For both of these characters, professional sports has sacred meaning. But there’s not a single scene in KING JAMES that takes place at a basketball stadium. Rather, the whole play consists of dialogue between Matt and Shawn. Again, this can fall flat on the stage. But Joseph’s dialogue is skillfully written and naturalistic — many of Shawn and Matt’s issues with one another derive from the subtext. It’s a brilliant example of “showing, not telling” in playwriting. And it enables the takeaway of the play to be that both friendship and sports fandom require faith and effort.

Directed by Kenny Leon, Davis and Perfetti give magnificent and congenial performances. The rapport between these two actors is so strong, and the friendship feels entirely real. They volley their lines back and forth at one another with ease. Much of the dialogue feels light and playful, but Joseph hints at more serious undercurrents. In this way, the dialogue and the line deliveries mirror real conversations between friends; sometimes, the meaning comes from the subtext. For example, in one scene, Shawn, who is Black, calls out Matt, who is white, on some of his blind spots. But the moment doesn’t feel forced; instead, it feels like a natural breaking point in a discussion between two friends. In this way, Joseph infuses tension into Shawn and Matt’s friendship, but it feels altogether real. And ultimately it’s a real feel-good experience to watch Davis and Perfetti embody these roles onstage.

The production design for KING JAMES is also clever, clearly marking the transition of each time period between scenes. Khloe Janel joins the cast in the role of DJ, and they are clearly having the time of their life in that role. Todd Rosenthal’s clean and contemporary set has some delightful tricks to reveal. And Rob Milburn and Michael Bodeen’s sound design incorporates elements of what I like to call “sound designers having fun” — the pop music selections for each scene clearly help establish each moment in time.

KING JAMES is an enjoyable ode to friendship and sports fandom. Joseph’s text, along with Leon’s direction and Davis and Perfetti’s remarkable performances, show that friendship and fandom aren’t always easy, but that it’s worth holding onto those anchors.

One thought on “Review: KING JAMES at Steppenwolf Theatre Company”