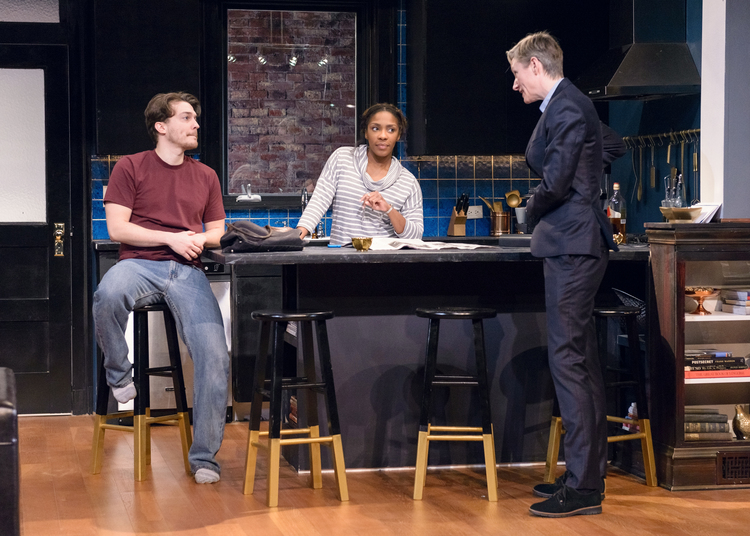 One of the most pervasive images in Sarah Gubbins’s play COCKED, now in its world premiere production at Victory Gardens under the direction of Joanie Schultz, is an incredibly shiny silver pistol. This prop pistol reveals itself at the end of the first scene in the play–and while it then quickly disappears, we know that it lingers–and that it has a high probability of going off at some point in the play. Likewise, Gubbins’s timely play, which is set in Chicago’s Andersonville neighborhood and examines our relationship with guns, strikes a balance between tense and frequently hilarious. Gubbins’ natural, laugh-out-loud funny dialogue for all three characters in the play never ceases to entertain but the tension underneath those moments of levity also stays present.

END_OF_DOCUMENT_TOKEN_TO_BE_REPLACED

The Hypocrites’ THE GLASS MENAGERIE Displays A Powerful Shine

Upon entering the Den Theatre’s Heath Main Stage to take in The Hypocrites’ production of THE GLASS MENAGERIE, I was immediately struck by the bottles upon bottles of breathtaking glass that cover Grant Sabin’s decrepit-yet-beautiful set. Like director Hans Fleischmann’s production itself (a remount of a production he originally envisioned for Mary-Arrchie Theatre Company), the set for this GLASS MENAGERIE both exhilarates yet also supplies a sense of foreboding. When Fleischmann (who also stars) takes to the stage as Tom Wingfield, he embodies the role of the vagabond dreamer in every way. In this staging ofTennessee Williams’ classic 1944 memory play, Fleischmann beckons audiences anew into the story—but his mangy hair, wild beard, and tattered attire (Mieka Van Der Ploeg’s costume designs are a treasure throughout) keep us slightly distrustful. Nevertheless, this GLASS MENAGERIE captivates throughout—and though this play has been around for 72 years, the material felt entirely fresh to this first-time viewer.

END_OF_DOCUMENT_TOKEN_TO_BE_REPLACED

The touring production of Roundabout Theatre Company’s CABARET dazzles just as much as it did on Broadway—where it was a critical and commercial success both from 1998-2004 and more recently, when it was remounted from March 2014-March 2015. Now Chicago audiences have the opportunity to witness original director Sam Mendes and co-director/choreographer Rob Marshall’s stunning, beautifully constructed musical revival—undoubtedly one of the best I’ve ever seen. Robert Brill’s Broadway set design is replicated almost exactly here, setting the stage with a powerful mix of glitz and decrepitness. The split-level stage showcases a large, lopsided frame with bright shining bulbs—though some are conspicuously missing. Like John Kander and Fred Ebb’s musical itself (with book by Joe Masteroff), this tour staging captures the vivacious and entertaining atmosphere of 1930s Berlin while also allowing us to clearly see the cracks beneath the surface. William Ivey Long’s masterful costumes also strike this balance. And, of course, so do the performances. When the Kit Kat Klub ladies (portrayed here by Alison Ewing, Margaret Dudasik, Hillary Ekwall, Aisling Halpin, and Dani Spieler) walk onstage during CABARET’s famous opening number “Willkommen,” they execute their choreography with precision—but the looks of disdain and apathy on their faces indicate they’d rather be elsewhere. And yet, these captivating performances keep audiences engaged.

END_OF_DOCUMENT_TOKEN_TO_BE_REPLACED

Porchlight Music Theatre’s production of FAR FROM HEAVEN marks the musical’s Chicago premiere—the show debuted Off-Broadway at Playwrights Horizons in 2013 and takes the titular 2002 Todd Haynes-directed film as its source material. And while this musical from composer-lyricist team Scott Frankel and Michael Korie was written three years ago, FAR FROM HEAVEN touches on issues of gender, sexuality, and race in 1957 suburban Connecticut that poignantly resonant with the present moment. At the center of the musical is Cathy Whittaker (the superb and stunning Summer Naomi Smart), a 1950s housewife and mother—decked out in Bill Morey’s outstanding period-authentic dresses and residing in Grant Sabin’s charming set. At the top of the show, she catches her husband, Frank (Brandon Springman) cheating on her—with a man. Stunned by this secret, Cathy is forced to confront the reality of what happens when her life cannot conform to the societal pressures and ideals coming at her from both the media and friends–a matter which is further complicated when she strikes up an unexpected friendship with her black gardener, Raymond Deagan (Evan Tyrone Martin).